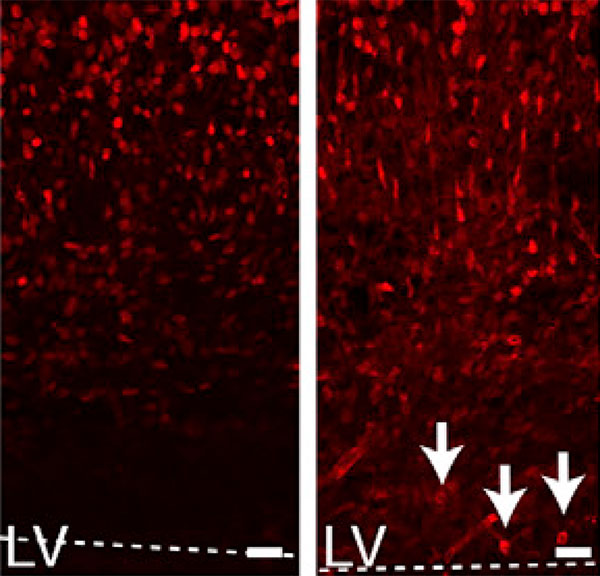 Lost in space: Brain tissue from an embryonic mouse with a mutant copy of ANKRD11 (right) shows misplaced neurons relative to a control (left).

The autism-linked gene ANKRD11 helps to package DNA in the nucleus and plays a critical role in the early growth and positioning of neurons, according to a study published 12 January in Developmental Cell1.

The study solidifies the role of ANKRD11 in ‘chromatin remodeling’ — a process that regulates the expression of other genes by changing the structure of DNA, and one that is known to be disrupted in autism.

It also suggests that some forms of autism, which has been dubbed a disorder of synapses, originate before those synapses, or neuronal junctions, take shape, when the neurons themselves are still forming.

“This provides an example of how some of these autism genes may be working at even earlier stages of development,” says lead researcher Freda Miller, a senior scientist at the Hospital for Sick Children in Toronto, Canada.

Miller and her colleagues found that in embryonic mice with one mutant copy of ANKRD11, neuronal stem cells show altered expression of 41 genes involved in early nervous system development. The mice also have some autism-like symptoms, such as impaired social interactions with other mice.

“I think [the study] is a good example of how to address the function of risk factors in autism-related biology,” says Hongjun Song, professor of neurology and neuroscience at Johns Hopkins University in Baltimore, who was not involved in the study. “With so many risk factors identified, we really need to have a systematic way to look at how these risk factors can function in neural development.”

Researchers first linked ANKRD11 to autism in 2008 in a boy with autism who lacks a copy of the gene2. Since then, mutations in the gene have turned up in at least 15 people with autism, helping to propel ANKRD11 onto a list of 50 ‘high-confidence’ autism genes.

The gene is also linked to KBG syndrome — a rare disorder characterized by intellectual disability and malformations of the teeth and bones3, 4.

“Not only are the numbers of neurons that are made messed up, but they don’t go to where they’re supposed to go.”

Previous studies in cancer cell lines hinted at a potential role for ANKRD11 in remodeling chromatin, the protein complex that entwines DNA in the nucleus5. But its specific role in the process — particularly in the brain — was unknown. “It had hardly been studied at all,” says Miller.

To uncover ANKRD11’s function, Miller and her colleagues looked at its pattern of expression in the brains of embryonic mice. The gene is highly expressed in neurons of the cortex — the brain’s outer layer — as well as in the stem cells that give rise to those neurons.

When the researchers prevented the expression of ANKRD11 using short hairpin RNA, the proliferation of those stem cells slowed and the cortex contained fewer neurons. What’s more, many of those neurons had failed to migrate to the correct destination. The same pattern emerged when the researchers looked in the developing brains of mice that have a damaging mutation in one copy of the ANKRD11 gene.

“Not only are the numbers of neurons that are made messed up, but they don’t go to where they’re supposed to go,” Miller says.

As adults, the mutant mice are less active in an open field test than controls are. They also spend more time grooming themselves, an indicator of repetitive behavior. And unlike controls, they do not prefer to interact with an unfamiliar mouse over a familiar one or an inanimate object — a behavior reminiscent of the social deficits seen in autism.

It is still unclear, however, how the cellular changes in the embryonic cortex relate to the animals’ behaviors in adulthood.

“I think they’ve scratched the surface,” says Robert Hevner, professor of neurological surgery and pathology at Seattle Children’s Research Institute in Washington. “Several changes in neurodevelopment were found, but it’s not clear which of these is most important yet.”

What’s more, because the researchers looked only at embryonic mouse brains, they do not know whether the neuroanatomical abnormalities persist into adulthood. It may be that a compensatory mechanism kicks in and normalizes the number of neurons during later brain development, Hevner says.

It is also unclear how the disruption of chromatin remodeling genes in general leads to autism.

Two massive sequencing studies last year found that many of the genes implicated in autism encode proteins that help package DNA in the nucleus. But researchers are just beginning to understand how those genes affect the function of neurons.

“That’s the big challenge for all of us in the field — being able to link a chromatin remodeling factor to a particular developmental pathway or process,” says Albert Basson, reader in developmental and stem cell biology at King’s College London in the U.K.

Basson was not involved in the new study, but is investigating the brain function of CHD8, another autism gene linked to chromatin remodeling. “There’s really not much known about how these factors might give rise to autistic phenotypes,” he says.