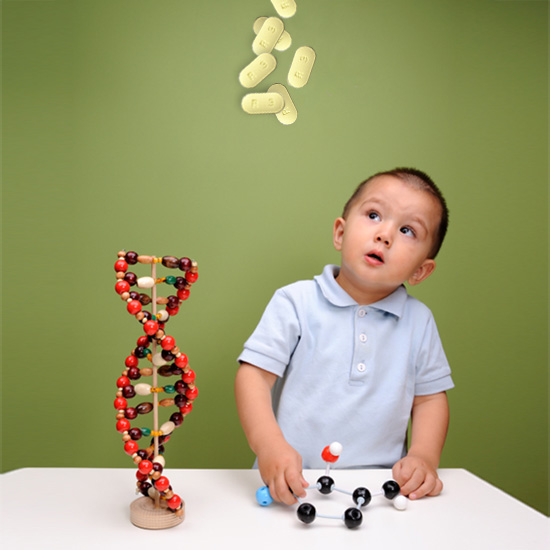 Genetic genie: only half of children with autism who take risperidone show improvement in irritability.

Risperidone, an antipsychotic drug often prescribed to treat irritability in children with autism, may be more effective — and cause fewer side effects — depending on an individual’s genetic make-up, researchers report in the October issue of The Pharmacogenomics Journal1.

“As with many medications, response to risperidone seems to be dependent on genetic markers, particularly the genes involved in the metabolism and mode of action of the drug,” says lead researcher Astrid Vicente, principal investigator in genetic epidemiology at Instituto Gulbenkian de Ciencia in Lisbon.

Nearly one in three children with autism spectrum disorders take an antipsychotic drug to alleviate symptoms such as social withdrawal, irritability, sleeplessness and anxiety2. Risperidone is one of the most commonly prescribed, but its side effects include weight gain, drowsiness and tardive dyskinesias — repetitive, involuntary movements such as grimacing and lip smacking.

The drug has a powerfully positive effect on some children’s symptoms, and no effect at all on others. “Right now, we prescribe it to nearly everyone because it works, just not in all kids,” says Shafali Jeste, assistant professor of psychiatry and neurology at the University of California, Los Angeles, who was not involved in the study. “And there’s no way to predict which child will respond.”

In a review published online 6 October in the Journal of Child Neurology, Jeste and colleagues note that about half of children with autism who take the drug show significant improvements in social functioning and problem behaviors such as aggression and irritability3.

However, few studies have explored the reasons for this variability in individual response.

“Our idea was to look at why risperidone is well-tolerated in some individuals and not in others,” Vicente says, “and why some children do not respond at all.”

The researchers recruited 45 children who were outpatients at the Hospital Pediátrico de Coimbra in Lisbon, and who had been medication-free for three months. The team used blood samples to test each child for 15 genetic variants of eight genes involved in the drug’s pharmacokinetics — absorption, metabolism, distribution and excretion — and four genes regulating its pharmacodynamics, or mode of action.

Of the 31 children who completed the study, some carry variants of cytochrome P450 genes that cause them to metabolize the drug either very quickly or very slowly. In general, “those who metabolize and clear a drug very quickly don’t experience much of a [positive] effect,” Vicente points out. Conversely, she says, “Slow metabolism of a drug can lead to more severe side effects.”

Risperidone binds to various receptors in the brain, including brain-derived neurotrophic factor (BDNF), a protein that supports the growth of new neurons and the junctions between them. Studies have suggested that BDNF is also associated with weight regulation and eating behavior in people and in mice4.

As a group, the children who remained in the study for one year showed marked improvement in sociability and a decrease in disruptive behaviors as measured by their scores on the Autism Treatment Evaluation Checklist, a test designed to evaluate the effectiveness of various treatments.

The researchers found, however, that only children with certain genetic variants showed improvement. One of these genetic markers is P-glycoprotein, a member of a protein family that helps transport molecules across cell membranes. P-glycoprotein operates as a gatekeeper in the gut, brain and other organs, letting some molecules in and keeping others out.

Children with a particular variant of the gene showed greater improvement on the autism checklist, perhaps because the gene inhibits P-glycoprotein’s ability to flush risperidone out of cells, resulting in higher levels of the drug in the brain.

How much weight the participants gained during the study also seems to be associated with specific genetic variants. Children with one of the cytochrome P450 variants were considerably less likely to show an increase in either their waist circumference or body mass index. These individuals are “ultra-rapid metabolizers,” meaning that they break down and excrete the drug quickly.

Finally, individuals with two different polymorphisms have higher levels of the hormone prolactin. Prolactin is known to lower the levels of sex hormones, a potential problem when the drug is given to children going through puberty.

Although the study is too small to guide clinical practice at present, “it may help identify targets for new drugs in the long run based on knowing which receptors seem to contribute to response,” says Steven Siegel, assistant professor of psychiatry at the University of Pennsylvania, who was not involved in the study.

Meanwhile, Vicente says she hopes the results are provocative enough to encourage other researchers to validate her results in a larger sample. “We don’t have the means to do it here,” she says. “But we hope that someone else will.”