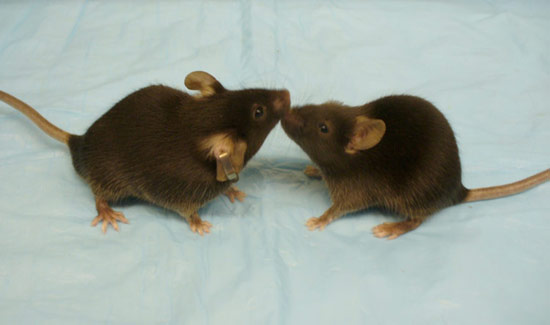 Mutations in a protein called GRIP1, important for the function of synapses — the junctions between neurons — may contribute to social deficits in autism, researchers reported 22 March in the Proceedings of the National Academy of Sciences1.

GRIP1, or glutamate receptor-interacting protein 1, is a scaffolding protein that gathers other proteins into a large complex at the synapse. Several other studies have implicated synaptic proteins in autism.

In normal cells, GRIP1 shuttles receptors for the chemical messenger glutamate to the surfaces of synapses. Glutamate, a chemical responsible for sending excitatory signals between neurons, is required for learning and memory.

“A lot of the genes that have come up in autism screens are pointing toward excitatory synaptic transmission,” says Richard Huganir, director of neuroscience at Johns Hopkins University in Baltimore, Maryland. Huganir, a lead investigator on the new study, first identified GRIP1 in 19972.

In the new study, his team scanned the genomes of 480 individuals with autism and identified five missense mutations that are not present in controls. The mutant proteins recycle glutamate receptors back to the cell surface more rapidly than in controls. With more receptors on the surface, a neuron is more sensitive to glutamate and can become overexcited, potentially leading to cell damage or death.

Mutations in GRIP1 also appear to contribute to social interaction deficits. “These variants are not by themselves causing autism, but they are likely modifiers of behavior,” says Tao Wang, Huganir’s collaborator, and assistant professor of pediatrics at Johns Hopkins.

Others are skeptical, however. Although the work linking GRIP1 to synaptic function is convincing, the implications for autism are tenuous at best, says Thomas Bourgeron, professor of genetics at the Institut Pasteur in Paris, France.

In 2003, Bourgeron published the first case studies of mutations in two synaptic proteins, NLGN3 and NLGN4, in two families with a history of autism3.

“[GRIP1] is a very interesting protein, no doubt,” Bourgeron says. “The question is, is it contributing to autism?”

In the new study, the researchers assessed GRIP1 variants in two families, each with two brothers who have autism.

In one of the families, one brother has two copies of a GRIP1 variant and scored lower on social interaction tests than the other brother, who has only one GRIP1 variant.

In the second family, one brother has a single GRIP1 variant and has lower social interaction scores than his sibling, who doesn’t have any GRIP1 variants.

The researchers also created mice that lack the GRIP1 gene. These mice spend more time interacting with other mice, suggesting that GRIP1 has a role in social behavior. The results also support the idea that enhancing the function of this protein could impair social interactions.

But that conclusion is premature, experts caution.

“There’s still a long way to go to understand how this gene leads to autistic-like behavior,” says Guoping Feng, an investigator at the McGovern Institute for Brain Research at the Massachusetts Institute of Technology.

In March, Feng and colleagues published a mouse model of SHANK3, another autism candidate gene involved at the synapse4.

A deletion in SHANK3 causes impaired social interactions, obsessive grooming and abnormal synapses in mice, linking SHANK3 to social deficits reminiscent of those seen in autism.

It would be helpful to create a similar animal model for GRIP1, one that inserts the GRIP1 mutations found in the study, rather than deleting the gene entirely, says Feng. “How these gene mutations lead to [autism-like] behavior, that’s the thing we are missing.”