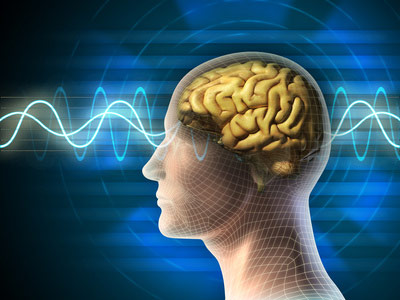 Wave theory: Low signal-to-noise ratios from brain scans could be used as a biomarker for autism.

Wave theory: Low signal-to-noise ratios from brain scans could be used as a biomarker for autism.

The brain is never quiet: Every region constantly fires electrical messages. But some signals are sharp voices, whereas others are background murmurs.

In high-functioning adults with autism, the signal-to-noise ratio in the sensory cortex, the outer region of the brain that responds to stimuli from the environment, is significantly lower than in healthy controls, according to a new study. The unpublished research was presented Friday at the Cell Symposia: Autism Spectrum Disorders: From Mechanisms to Therapies in Washington, D.C, a satellite conference of the Society for Neuroscience annual meeting.

This signaling variability could be an endophenotype, or quantifiable signature, of autism, the researchers say.

“One possible suggestion is that these endophenotypes might serve as potential biomarkers,” says lead investigator Marlene Behrmann, professor of psychology at Carnegie Mellon University in Pittsburgh. “They may certainly be used to straddle the bridge between synapses on the one hand and more complex behavior on the other.”

There are other clues that point to erratic brain signaling in autism, including the high rate of seizures and severe sensory sensitivities among individuals with the disorder.

The results jibe with another imaging study Behrmann and collaborators published last year. The researchers found that when looking at or performing hand gestures, men with autism show highly variable brain responses, rather than a steady signal, in mirror neurons. These cells are activated when an individual either watches or performs an action, and have been linked to autism.

In the new study, Behrmann measured the brain activity of 14 individuals with autism and 14 healthy controls, aged 19 to 39 years, using fMRI and eye tracking. While in the scanner, participants were instructed to keep their eyes on a letter on a screen and look for it to change.

As they focused on this task, the participants were exposed to other kinds of stimuli, such as sounds or images popping up on the periphery of the screen. A machine called a ‘manifold’ also delivered tactile stimulation to their skin.

The researchers analyzed brain activity in regions activated by each stimulus: visual, auditory and somatosensory cortex. In all areas, they found no significant difference between the autism and control groups in the amplitude, or strength, of brain signals. What differed was the background noise on the scans.

The signal-to-noise ratio, calculated by dividing the average amplitude of the brain signals by the variability in the amplitude, is significantly lower in the cortex of individuals with autism than in that of controls, the study found.

The autism and control groups did not differ in pulse rates, respiration patterns, head movements or eye movements, and all of the participants spotted the letter change.

Behrmann’s group is also working on measuring variability using electroencephalography, a non-invasive imaging method that can pick up changes in brain activity by the millisecond.

Behrmann also underscores the importance of looking at changes across different ages. Last year, for example, she reported that toddlers with autism have weak synchrony between brain hemispheres.