Autism and the cell’s antennae 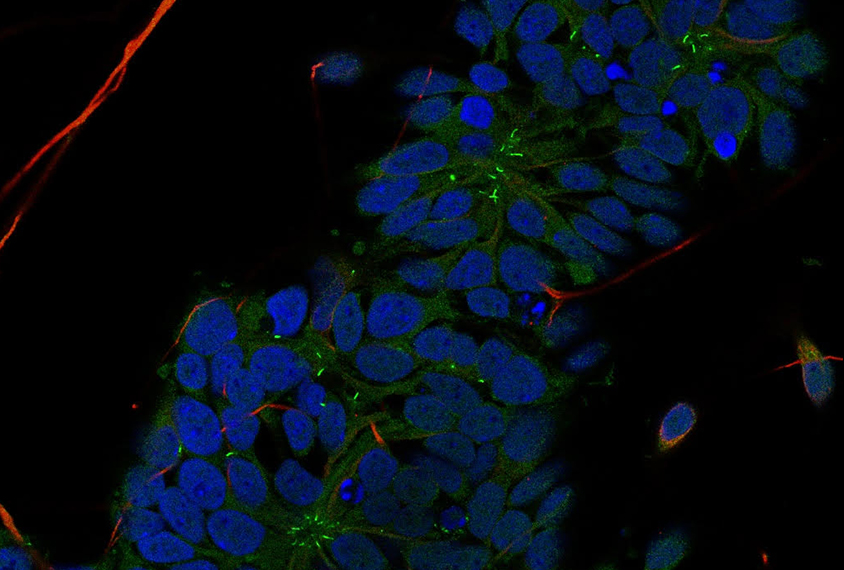 About five years ago, Catarina Seabra made a discovery that led her into uncharted scientific territory.

Seabra, then a graduate student in Michael Talkowski’s lab at Harvard University, found that disrupting the autism-linked gene MBD5 affects the expression of other genes in the brains of mice and in human neurons. Among those genes, several are involved in the formation and function of primary cilia — hair-like protrusions on the cell’s surface that sense its external environment.

“This got me intrigued, because up to that point, I had never heard of primary cilia in neurons,” Seabra says. She wondered if other researchers had linked cilia defects to autism-related conditions, but the scientific literature offered only sparse evidence, mostly in mice.

Seabra, now a postdoctoral researcher in the lab of João Peça at the Center for Neuroscience and Cell Biology at the University of Coimbra in Portugal, is spearheading an effort to look for a connection in people: The Peça lab established a biobank of dental stem cells obtained from baby teeth of 50 children with autism or other neurodevelopmental conditions. And the team plans to look at neurons and brain organoids made from those cells to see if their cilia show any defects in structure or function.

Other neuroscientists, too, are working to understand the role of cilia during neurodevelopment. Last September, for example, researchers working with tissue samples from mice discovered that cilia on the surface of neurons can form junctions, or synapses, with other neurons — which means cilia defects could, at least in theory, hinder the development of neural circuitry and activity. Other teams have connected several additional autism-related genes, beyond MBD5, to the tiny cell antennae.

“Does that mean that cilia are causal [in autism]? I don’t know,” says Helen Willsey, assistant professor of psychiatry at the University of California, San Francisco, who is investigating the relationship between autism-related genes and cilia in frogs. “But I think there’s definitely something going on with cilia.”

Although researchers have not yet found any direct links, several tangential lines of inquiry tie cilia to autism.

Autism traits, for instance, are sometimes part of cilia-related disorders — or ciliopathies. Social difficulties and repetitive behaviors occur in up to 77 percent of people with Bardet-Biedl syndrome, a rare ciliopathy that causes kidney problems and vision loss, and in up to 40 percent of those with Joubert syndrome, a cilia-related condition characterized by a misshapen cerebellum and motor problems.

Cilia defects are also associated with a slew of other neurodevelopmental conditions, including schizophrenia, tuberous sclerosis and fragile X syndrome. And many genes related to autism have intriguing connections to cilia: Lowering their expression can reduce the number of cilia on cells, for example. Mice with mutations in an autism-linked section of chromosome 16 show altered expression patterns of ciliary genes and abnormally short cilia in specific brain regions.

Rainbow connections: Cilia in the mouse hippocampus can form junctions with other neurons.

The problem is, researchers “know almost nothing about the primary cilium in neurodevelopmental conditions other than ciliopathies,” says Hye Young Lee, assistant professor of cellular and integrative physiology at the University of Texas Health Science Center at San Antonio.

In a 2020 study, Lee’s team showed that mice missing FMR1, the gene that is mutated in people with fragile X syndrome, have fewer cilia in the dentate gyrus, a part of the hippocampus that contains neural progenitor cells. Because cilia play important roles in cell division, having fewer or defective cilia may affect brain development, Lee says.

But it’s difficult to pin down the exact mechanisms involved, says Thomas Theil, reader in developmental biology at the University of Edinburgh in Scotland. “All processes you can think of during the development of the nervous system are controlled by cilia.”

That said, not everyone with defects in ciliary genes has autism, so some altered processes may be more likely to contribute to neurodevelopmental conditions than others.

During the development of the cortex — the brain’s outer layer that is involved in higher cognitive functions — cilia shape several key events, including neuron migration and axon pathfinding, in which a neuron extends its projection to a precise target region.

And as part of the September discovery of synaptic connections between axons and the cilia of neighboring neurons, the researchers showed that cilia are even involved in neurotransmission, passing signals between cells. When an axon releases the neurotransmitter serotonin onto cilia receptors, it triggers a cascade of signals that open up the coiled complex of DNA and protein in the neuron’s nucleus to make DNA accessible to proteins that turn genes on and off.

“I got super excited when I found that the cilium […] directly talks to the nucleus to alter gene expression,” says study investigator Shu-Hsien Sheu, a senior scientist in David Clapham’s lab at the Janelia Research Campus in Ashburn, Virginia.

The axon-cilium synapse is present in mice as early as 7 days after birth, Sheu says. “If you were to translate that timeline from mice to humans, you could argue that these synapses are present in toddlers,” he says. This timing means that cilia defects affecting neurotransmission during postnatal development may also contribute to some neurodevelopmental conditions, he says.

“Cilia were already known for being important, but they’re getting even more important,” says Kerstin Hasenpusch-Theil, a postdoctoral researcher in Theil’s lab, commenting on the find.

Although some researchers are focusing on the functional connections cilia may have to neurodevelopment, others are looking at the links these structures may have with autism-related genes.

Willsey and her colleagues have previously shown that two autism-linked genes, DYRK1A and KATNAL2, are required for cilia formation and brain development in frogs. The genes localize to, and likely regulate, the molecular components that form the scaffolding for cilia.

Willsey plans to investigate whether other autism-related genes also localize to the cilium’s scaffolding and to probe how cilia are affected by dampened expression of those genes. To do so, she’s working in frogs, whose cells have bigger cilia than mammalian cells do.

If she and other researchers could show that many different autism-related genes converge on cilia defects, it would be “strong evidence” of a causal link between cilia and autism, Willsey says.

In Portugal, Seabra and her colleagues recently found structural alterations in cilia on neurons derived from a child with a mutation in MBD5, the same autism-linked gene she started this work with. Understanding the molecular mechanisms behind such cilia differences could suggest new therapeutic approaches, she says.

In the future, Seabra says she hopes to study these long-overlooked structures in neurons derived from people with idiopathic autism, or autism without a genetic cause. “Everyone in neuroscience is mostly focusing on neurons and synapses,” she says. “We want to put cilia on the autism map.”

A previous version of this story incorrectly identified Catarina Seabra as a team leader; she is a postdoctoral fellow.