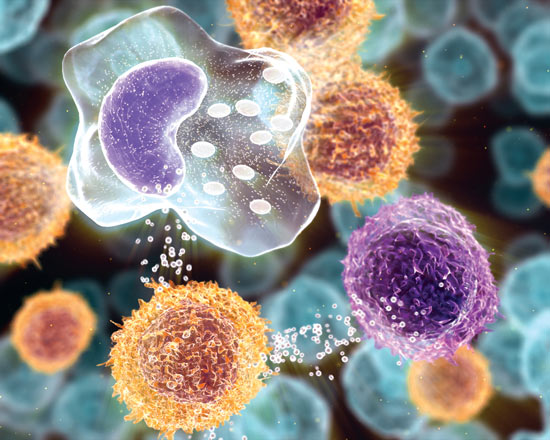 Signs of immunity: Cytokines, molecular soldiers in the body’s war against infection, seem to be improperly regulated in people with autism and fragile X syndrome.

Scientists have identified distinct blood signatures of cytokines — proteins that control communication between cells of the immune system — in individuals with developmental disorders.

The results, published 25 January in Brain, Behavior, and Immunity, add to research showing that certain cytokines are elevated, and others depleted, in people with autism2. Although scientists don’t know yet if cytokine patterns could reliably predict fragile X or autism — in part because they measure cytokine levels in the blood and not in the brain — the study adds heft to a long-standing hypothesis that the immune system goes awry in both disorders.

“The findings suggest that the immunological background of patients with fragile X and autism versus controls may be very different,” says Carlos Pardo-Villamizar, associate professor of neurobiology and pathology at Johns Hopkins University, who was not involved in the study. Because the body’s immune responses are known to affect thought and behavior, the cytokines may contribute to features of autism.

Several lines of evidence suggest a link between the immune system and autism. For instance, some individuals with the disorder have fewer total antibodies than do healthy controls. The lower the levels of some antibodies such as immunoglobulin G, the more severe are particular symptoms, such as irritability, repetitive behaviors and hyperactivity3.

So far, no clear-cut cytokine patterns have emerged in individuals with autism. That is partly because studies have examined different tissues, such as blood, brain and cerebrospinal fluid — the nutrient-rich solution that bathes the brain and spinal nerves — in individuals of different ages and with varying symptom severity.

For instance, compared with healthy individuals, the cytokine transforming growth factor beta is lower in the blood4, but higher in cerebrospinal fluid and brain tissue of people with the disorder5.

The immune system has also been implicated in fragile X syndrome, a disorder caused by mutations in the FMR1 gene. Children with fragile X syndrome tend to get infections more easily than do healthy peers, according to some reports6. Anecdotal reports also attest that children with fragile X have recurring gastrointestinal woes, such as loose stools, which could arise if immune molecules in the gut are reacting to certain types of foods.

Problems with brain development and function in autism spectrum disorders may result from improper activation of T-cells, which secrete cytokines, according to a paper on Rett syndrome published in the April issue of Molecular Psychiatry7. Therapies that boost the immune system might address some of these anomalies, the researchers suggest.

A half-dozen of these molecules differ between the groups, the scientists found. For example, cytokines interleukin-1 alpha and interleukin-12 show up in larger quantities in people with both fragile X and autism compared with those who have fragile X alone, and these proteins are higher in both groups than in controls.

Researchers should measure these cytokines not only in blood, but in brain tissue and cerebrospinal fluid, Pardo-Villamizar says. Because only some cytokines cross the barrier between blood and brain, and because the molecules have vastly different roles in each tissue, blood measures do not necessarily reflect neurodevelopment.

“As a study of biomarkers, the findings are very interesting, and they are relevant for the neurobiology of the disease,” Pardo-Villamizar says. “But I don’t think that we can extrapolate all these findings to [cytokines in] the brain of these patients.”

Researchers don’t yet understand the pathological or behavioral consequences of these differences in cytokine levels.

“There is really a dysregulation of these cytokines [in fragile X syndrome],” says investigator Flora Tassone, a full research biochemist at the University of California, Davis. “Now that there is a hint that something is going on, maybe people will start to look in more detail.”

Much of the previous work on cytokines in autism focused on tumor necrosis factor alpha (TNF-alpha) and interleukin-6 (IL-6), which are elevated in the brains of people with autism spectrum disorders compared with controls. Both cytokines can directly influence the ability of neurons to change the strength of their connections, a basic mechanism of learning, memory and neural development8.

The new study found that IL-6 levels do not differ significantly between people with fragile X syndrome — with or without autism — and controls. But that doesn’t mean the molecule is not important in autism. Comparing the new findings with those of people with classic autism is inappropriate because mutations in FMR1 affect the transcription of hundreds of other genes, notes Paul Patterson, professor of biology at California Institute of Technology in Pasadena, who has done much of the work on IL-6 and autism.

“The mutation that causes fragile X –- we don’t know what it does to the immune system,” he adds. “So you can’t necessarily extrapolate from autism to fragile X with autism.”

In 2007, Patterson’s team found that activating the immune system of pregnant mice produces offspring with autism-like behaviors, such as an unwillingness to explore open areas, in adulthood11. These behaviors improve when the offspring receive an injection of an antibody that inhibits IL-6, suggesting that the cytokine is critical for proper brain development.

Tassone’s group plans to expand the study’s sample size and include a group of children with classic autism. They have already collected about 20 blood samples from 2- to 5-year-old children with the disorder.

The researchers found differences in cytokine levels in the children with autism, she says, but decided not to report them because the group’s age varies drastically from that of controls. The healthy participants in the study are 15 years old, on average, but range from toddlers to adults. This wide age span is typical in human studies, and may be problematic because cytokine levels change with age.

“Observational studies that are done in patients who are already out of neurodevelopmental stages are difficult to interpret,” Pardo-Villamizar says. “In the future, the studies need to concentrate more on the first two or three years of age, when the brain is still undergoing development.”