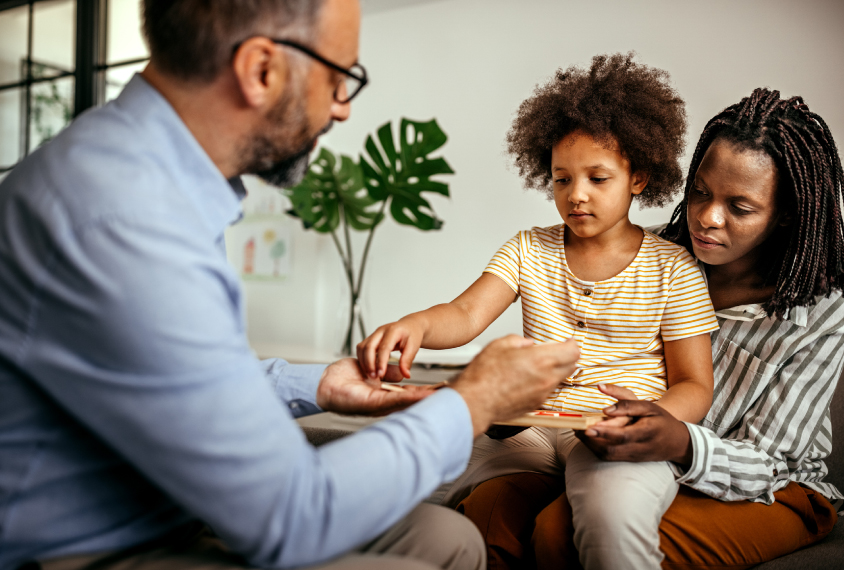 Personalized supports: Autistic children should receive help to develop skills that facilitate their “learning, participation and well-being,” according to the new Australian draft.

Therapies should be tailored to the individual needs of autistic children, with no minimum number of hours a child should get, according to a draft of Australia’s first national guideline for supporting autistic children. That guidance is among 84 recommendations published 18 July, compiled by a team of researchers, clinicians and autistic people that the Australian government’s Autism Cooperative Research Centre (CRC) convened over a nine-month period starting in October 2021.

In creating the guideline, the team relied on scientific studies about supports for autistic children, as well as insights from clinicians, autistic people and their parents.

“It’s only when all of those are combined that you actually get evidence-based practice,” says Andrew Whitehouse, professor of autism research at the Telethon Kids Institute and the University of Western Australia in Perth, who co-led the team. “It is essentially situating the literature within that local context of the clinicians and the community.”

The recommendations focus on supports for autistic children aged 12 and younger. They also include a suggestion that therapy providers have a baseline level of expertise and help parents acquire skills to better meet their children’s needs.

The recommendations are open for public comment until the end of August. A detailed “supporting evidence” document lays out the evidence that informed the guideline and describes considerations for implementation, plus the potential benefits for autistic children and for health equity.

Whitehouse says he and his team intend to revise their draft based on the feedback and pass it to the National Health and Medical Research Council, which plans to consider it for endorsement in November.

The report comes three years after the Australian government established another national guideline for autism diagnosis, which received mixed reviews. But unlike other countries’ guidelines, Australia’s new effort is among the first to suggest such an exhaustive list of best practices to aid an autistic child after diagnosis.

“Many countries have more national guidelines on assessment but less on the support and intervention side,” says Roald Øien, professor of special education and developmental psychology at the Arctic University of Norway and adjunct assistant professor at Yale University’s Child Study Center. Øien was not involved in developing the new guidelines.

Norway and other Scandinavian countries, for instance, have clear standards for autism diagnosis and the next steps, such as seeking early intensive behavioral therapy, but are less specific in their recommendations for personalized treatment, Øien says. “There’s no one evidence-based treatment that will work for everyone. I don’t know how good we are at individualizing these interventions.”

Recognition of the need to tailor supports to each autistic person features strongly in Australia’s draft guideline.

“Decisions about how much therapy a child receives are actually a result of the clinical decision-making of that individual clinician,” Whitehouse says. “We’re very clear that there is no minimum number of hours that promotes best outcomes for children.”

That stance represents a departure from U.S.-based guidelines, many of which recommend that autistic children receive a minimum number of hours of support. The New York state clinical practice guideline, for example, recommends at least 15 hours weekly of applied behavior analysis (ABA) or related therapies for autistic children. The Missouri state guideline from 2012 suggests a minimum of 25 hours for supports such as ABA or early intensive behavioral intervention programs. There are many additional examples, Whitehouse says.

Including the families of autistic children in supports and recognizing the human rights of children — especially children with a disability — form the foundation of the recommendations, Whitehouse says.

Unlike other government guidelines, the Australian draft puts an emphasis on neurodiversity-affirming supports, which was strongly endorsed by autism community members. Two recommendations state that supports should embrace a child’s unique perspective, and that the object of supports should not be to “cure” autism. Appropriate goals, instead, include helping a child to develop skills that facilitate their “learning, participation and well-being,” Whitehouse and his team write.

“There is a movement that is relatively recent in our field to be more inclusive and participatory in our approach to autism research,” says Paul Carbone, professor of pediatrics at the University of Utah, who was not involved in developing the new guideline. “I think having the same approach in the creation of guidelines is wonderful.”

Some experts say they worry that implementation of the guideline faces substantial barriers.

Its focus on taking holistic and strengths-based approaches is commendable, says Adam Guastella, professor of child and youth mental health and a clinical psychologist at the University of Sydney, who was not involved in creating the guideline. But it will be tough to put into practice without a substantial shift in the provider workforce and how supports are funded, he says.

“There’s a workforce shortage, and the shortage is most evident in vulnerable communities,” such as low-income, rural and culturally diverse communities, Guastella says. Without a serious commitment from the Australian government, Guastella says he fears those communities will not have equal access to the supports detailed in the guideline.

“If the government is serious about endorsing these guidelines, which they claim to be,” Guastella says, “they need to put some funding behind many of these statements.”

Whitehouse agrees. The ideal outcome from the guideline, he says, is that whether a person is in a city or in the desert, they “have the ability to access and receive the highest quality supports based on evidence. That’s what success is.”