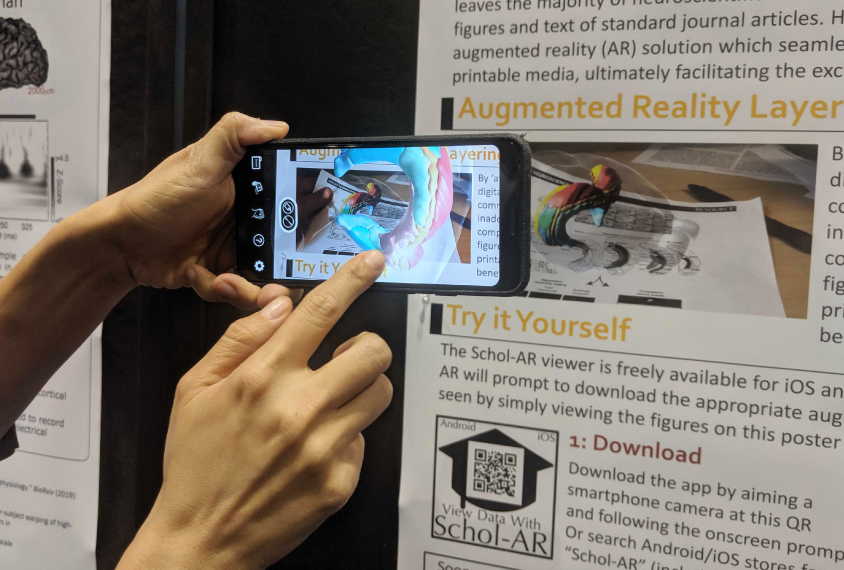 Lights, camera, action: Plots and charts spring to life from the page via the new app.

They say a picture is worth a thousand words. But what about a figure in a scientific paper?

These could say a whole lot more if they were able to show the entire dataset they are based on.

A new mobile app promises to deliver just that: It enhances scientific images by displaying augmented-reality renderings of the complete data over printed figures.

Neuroscientists are producing ever more complex 3D brain data, but they have been constrained to reporting it as flat, printable images. The app, called Schol-AR brings these images to life as movable 3D models or videos — like the moving photographs in Harry Potter’s world — on viewers’ smartphone cameras. Anyone with the app can view the augmented material as they read the paper.

Researchers debuted the app yesterday at the 2019 Society for Neuroscience annual meeting in Chicago, Illinois.

In a demonstration on the poster floor, attendees jostled one another for the chance to manually manipulate and rotate a detailed anatomical map of the hippocampus, and to scroll through the layers of a brain scan showing neural activity unfold.

The researchers say they hope the app will modernize scientific publishing.

“By presenting it in a way that people can scroll through and see the entire dataset, we improve the way we communicate research findings,” says Tyler Ard, assistant professor of research in Arthur Toga’s lab at the University of Southern California in Los Angeles. The lab previously created detailed visualizations of brain scans using the same rendering techniques used to create graphics for the “Harry Potter” movies.

The researchers plan to release a companion app that would allow scientists to upload their own material — movies, 3D models or stacks of images — and have them rendered into augmented-reality simulations.