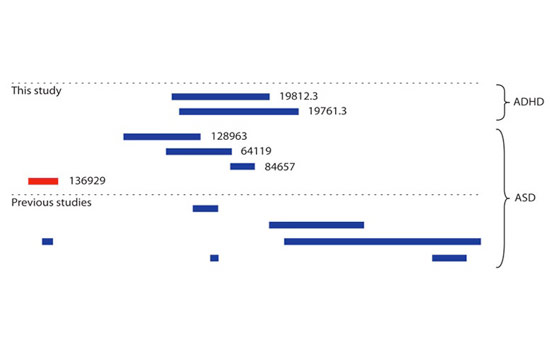 People with autism and attention deficit hyperactivity disorder (ADHD) share some of the same underlying genetic risk factors, according to a study published this month in Science Translational Medicine1. This is one of the first studies to find risk variants that are common to both disorders.

In searching for rare copy number variations (CNVs) — deletions and duplications in genetic material — in people with ADHD, the researchers found more than a dozen regions that include genes implicated in bipolar disorder, schizophrenia, intellectual disability and autism.

“What we are seeing is that some of these rare, inherited CNVs are hitting genes that can provide susceptibility to one or more of these neuropsychiatric conditions,” says lead investigator Stephen Scherer, chair of genetics and genomics at the University of Toronto in Canada.

The researchers found a significant overlap between CNVs they identified in 248 children, aged 5 to 17 years, with ADHD and another sample of 349 children with autism. None of the individuals in the autism group had previously been diagnosed with ADHD, and those in the ADHD group had not received an autism diagnosis prior to the study.

Comparing the genomes of participants with those of their parents turned up only three de novo mutations. This de novo mutation rate of 1.7 percent is only slightly higher than the 1 percent rate in controls. By contrast, 7.7 percent of the individuals in the study carried an inherited rare variant.

“The take-home message is that de novo CNVs don’t seem to be as big a contributor to ADHD as in autism and schizophrenia,” says Scherer.

Up to 80 percent of all children with autism are estimated to also have ADHD, and earlier studies have suggested some genetic overlap between the conditions.

Both ADHD and autism are highly heritable, though researchers have identified far fewer candidate genes for ADHD than for autism. None of the ADHD risk genes identified in earlier studies turned up in the new work.

That’s disappointing, says Peter White, associate professor of pediatrics at the Children’s Hospital of Philadelphia, who carried out the first study looking for CNVs in ADHD2. “At this point you would have hoped that there would be coalescence, but clearly this study reiterates that ADHD, like autism, is very heterogeneous,” White says.

When digging into medical records for the participants, the researchers discovered that one individual with a de novo mutation who had been diagnosed with ADHD at age 8 was then diagnosed with bipolar disorder at age 15.

This pattern of later onset or diagnosis of other disorders is repeated among those individuals with ADHD who have rare inherited CNVs. Many received ADHD diagnoses at age 5 or 6 but were later diagnosed with other neuropsychiatric diseases. The same risk genes may lead to different disease trajectories, depending on environmental or other genetic factors, Scherer says.

The most significant overlap uncovered is with autism, however. Of the risk regions the researchers identified for ADHD, five have been reported at least once in autism studies.

One region on chromosome 9q33.1 turned up in four individuals with autism and two with ADHD. Previous studies have reported deletions and duplications in this region in individuals with autism, schizophrenia, intellectual disability and bipolar disorder3,4,5,6. The region includes ASTN2 and TRIM32, proteins that are highly expressed in the cerebellum of both fetal and adult brains.

The researchers discovered that of the four individuals with autism, three meet diagnostic criteria for ADHD, and the fourth shows subclinical signs of the disorder.

The findings suggest that many individuals with autism may have undiagnosed ADHD, and vice versa.

One individual in the ADHD group carries an inherited CNV on the X chromosome that includes the autism risk gene PTCHD1. The researchers later discovered that his mother had suspected for years that her son is on the autism spectrum. Follow-up diagnostic testing confirmed her hunch.

Because this is one of the first studies to find a genetic overlap between autism and ADHD, researchers need to dig deeper to understand the overlap, says Bernard Crespi, professor of evolutionary biology at Simon Fraser University in Vancouver, Canada.

“This will allow you to begin to partition out some of the causal factors a little better and delineate some of the [diagnostic] subsets,” Crespi says. “But it’s still very early in the game.”

Retrospective studies can only go so far in teasing out these associations, adds White.

Unless researchers follow up earlier studies by tracking individuals with ADHD as they age, suggestive links like the ones identified in the new study will remain undiscovered. A child with high genetic risk for schizophrenia, for example, may have symptoms that look much like ADHD prior to the appearance of full-blown schizophrenia in late adolescence or young adulthood.

“What’s required is a formalized prospective focus that characterizes these individuals for many years and surveys them for all neuropsychiatric disorders,” he says. “ADHD in particular seems to sit in the middle of many of these conditions.”