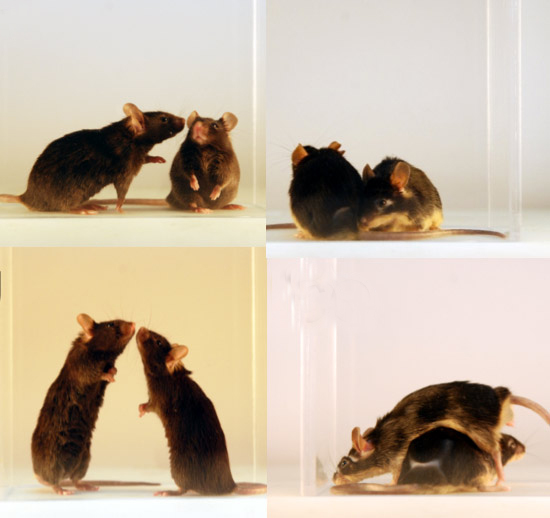 Close quarters: Asocial BTBR mice avoid faces, preferring to approach from the rear, when forced to interact with other mice.

An asocial inbred mouse strain called BTBR may show behaviors associated with autism, such as avoiding eye gaze and forming an attachment to objects, researchers reported Monday at the Society for Neuroscience annual meeting in San Diego.

“Some people might be irritated with me, but I would say we’ve kind of got an autistic mouse here,” says Caroline Blanchard, professor of genetics and molecular biology at the John A. Burns School of Medicine at the University of Hawaii in Manoa.

Blanchard and her husband, Robert Blanchard, call themselves “intense behaviorists.” Their expertise is in creating a natural-like setting for their mice, “so that they can show us themselves what they’re interested in doing,” she says.

BTBR mice have been studied extensively because of their asocial behavior and their potential as a mouse model for autism. The standard social assay, developed by Jacqueline Crawley‘s lab at the National Institute of Mental Health, involves putting mice in a pen in one of three chambers. A second chamber contains a mouse, and a third stands empty. BTBR mice are typically more interested in the empty chambers than in approaching a potential playmate.

The Blanchards’ team expanded on these studies by forcing BTBR mice to be near other mice. They put the BTBR mice and another mouse in a 7-by-11 centimeter enclosure. The researchers then scored several different kinds of social interaction between the mice: touching each other’s nose or face, sniffing rears, or actively evading each other.

BTBR mice may be asocial because either they don’t like other mice, or because they are anxious and afraid of them, the researchers note. In standard anxiety tests, which expose mice to heights or brightly lit corridors, the BTBR mice don’t seem to be more anxious, says Blanchard.

Social anxiety may be a different issue, however. When the researchers give the BTBR mice diazepam, which reduces anxiety, they approach a novel mouse as often as B6 mice do in the three-chamber assay.

“I think this is mind blowing,” says Patrick Bader, a postdoctoral fellow with Mehrdad Shamloo, who runs the Stanford Behavioral and Functional Neuroscience Laboratory. “It kind of proves that this three-chamber assay is not really [testing] autistic-like features, it’s [testing] an anxiety feature, which I think is a bomb.”

However, curing anxiety didn’t change the BTBR mice’s avoidance of touching other mice’s noses. “They are having none of that stuff,” says Blanchard. She suggests that this evasion is the human equivalent of avoiding eye contact.

Anxiety could still be a factor in this assay, Bader notes, because the researchers do not let the mice get used to the small chamber before starting their observations.

In addition to avoiding social interaction, BTBR mice “groom like a bat out of hell,” says Blanchard. In mouse models, this is often seen as analogous to repetitive behaviors in people with autism.

Not only do the mice BTBR groom more, but they strictly follow the conventional order of mouse grooming, which begins with the face and ends at the tail, veering from this order much less often than B6 mice do.

This love of order extends to objects as well. BTBR mice exposed to four different toys in a cage, such as a jack or a block, show a strong order of preference between the toys. The favorite toy varied between the mice, however, suggesting that one of these toys is not inherently more attractive than the others.

The BTBR mice also seem to play in a repetitive manner: they are four times more likely than the B6 mice to play with with any four toys in the same order each time.

These studies suggest that BTBR mice could model compulsive-type behaviors as well as simple repetitive motion.