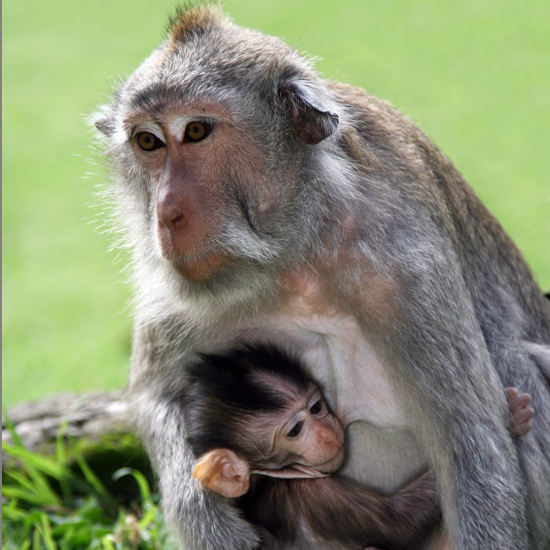 Maternal insult: Antibodies from mothers of children with autism cause baby monkeys to socialize less, pace more and repeatedly do back flips.

Antibodies directed against the fetal brain are present in some mothers of children with autism, confirming previous findings and suggesting that the antibodies could be used as a marker for the disorder, according to unpublished research presented yesterday at the Society for Neuroscience meeting in Chicago.

For the past few decades, researchers have screened blood, urine and saliva samples from people with autism for proteins and other molecules that could serve as markers of the disorder. But the search for these biomarkers has been challenging, in part because autism is thought to have more than one cause.

In 2008, researchers led by Judy Van de Water at the University of California, Davis, investigated maternal antibodies generated against a mix of human fetal brain proteins.

They found that 7 of 61 mothers of children with autism react to two unknown proteins, but mothers of healthy or developmentally delayed children do not show this response1.

When the researchers expanded the study, they found that 34 of 272 mothers — or 13 percent of— of children with autism have maternal antibodies that bind either or both fetal proteins. Only 3 of the 185 control mothers make these antibodies, in contrast.

Van de Water’s group then injected four pregnant monkeys with antibodies from mothers of children with autism, and four monkeys with antibodies from mothers of healthy children. The offspring of monkeys in the autism group pace more in their cages, and repeatedly do back flips on the tops of the wire cages. They also tend to socialize less with their mothers or healthy cage mates, compared with controls.

The scientists are trying to identify the fetal proteins to which the maternal antibodies bind. They have already fingered one, a 37-kilodalton protein, but Van de Water declined to reveal its function because the group is filing a patent for its use.

“We know that [the proteins are] not related to each other,” says Van de Water, an associate professor of internal medicine. “That is, they may be in a similar pathway but antibodies bind them independently.”

Her group, in collaboration with Daniel Campbell from the University of Southern California in Los Angeles, has found that the presence of antibodies to both human fetal brain proteins highly correlates with the presence of the same mutation in the MET gene that is associated with autism. The MET gene plays a role in regulating the immune system and the proliferation of epithelial cells lining the gut.

Of the moms who have the antibodies, all but one have the MET mutation, Van de Water says. “It was unexpected that it would be that strong of an association,” she adds.