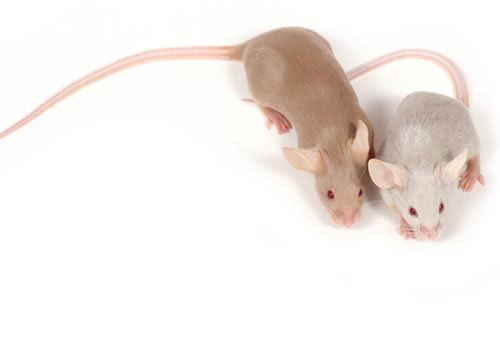 Courting calls: The antibiotic minocycline, which is in clinical trials, increases how often a male fragile X mouse serenades a female.

Minocycline, an antibiotic approved to treat various infections, including acne, can increase vocalizations and provide long-lasting improvements in anxiety in a fragile X mouse model, according to two posters presented at the Society for Neuroscience annual meeting in San Diego.

Minocycline is a new treatment for fragile X syndrome that showed promising results in a preliminary uncontrolled human study. It is undergoing more rigorous clinical testing at the University of California Davis MIND Institute.

In one of the new studies, the researchers gave minocycline for four weeks after birth to mice lacking the fragile X mental retardation protein, or FMRP. The treatment eases symptoms of hyperactivity and anxiety in these mice, and the effect lasts for at least four weeks after stopping treatment.

Interestingly, adult mice given minocycline also improve, but the effect does not persist after they stop taking the drug. This suggests that if minocycline is given during a key stage in development, it could permanently improve features of fragile X syndrome, says lead investigator Iryna Ethell, associate professor of biomedical sciences at the University of California, Riverside.

“Not a whole lot of research has been done on communication deficits in fragile X model mice,” says Sarah Rotschafer, a graduate student in the laboratory of Khaleel Razak, assistant professor of psychology at the University of California, Riverside. The experiment is also a way to detect sociability, says Ethell, because the males call to females with whom they’re interested in mating.

The fragile X knockout mice call to females less often, and minocycline rescues this effect. Mutant mice call more as they get closer to the time of actual mating, however.

“If minocycline improves behavior in fragile X syndrome, what is it doing to neurons?” asks Lorraine Dansie, a graduate student in Ethell’s laboratory.

The neurons in both fragile X mice and people with the disorder have immature projections, or dendritic spines, lacking the characteristic mushroom-like head. Minocycline treatment increases the size and numbers of mushroom bodies in neurons from fragile X mice.

In a 2009 study, Dansie and colleagues showed that the enzyme matrix metallopeptidase 9 (MMP9) inhibits the formation of the dendritic spines. They also found that MMP9 levels are higher in fragile X mice.

In the new work, the researchers show that inhibiting MMP9 directly in neurons from fragile X mice increases the maturity of their spines.

Several potential treatments for fragile X syndrome inhibit mGluR receptors, which mediate signaling by the neurotransmitter glutamate. The researchers show that the mGluR pathway, which affects dozens of proteins, also increases the expression of MMP9.

Targeting MMP9 instead of the receptors might be a better therapeutic target, Dansie suggests. “We’re hoping we can get at a target and just downregulate one thing, instead of hundreds.”