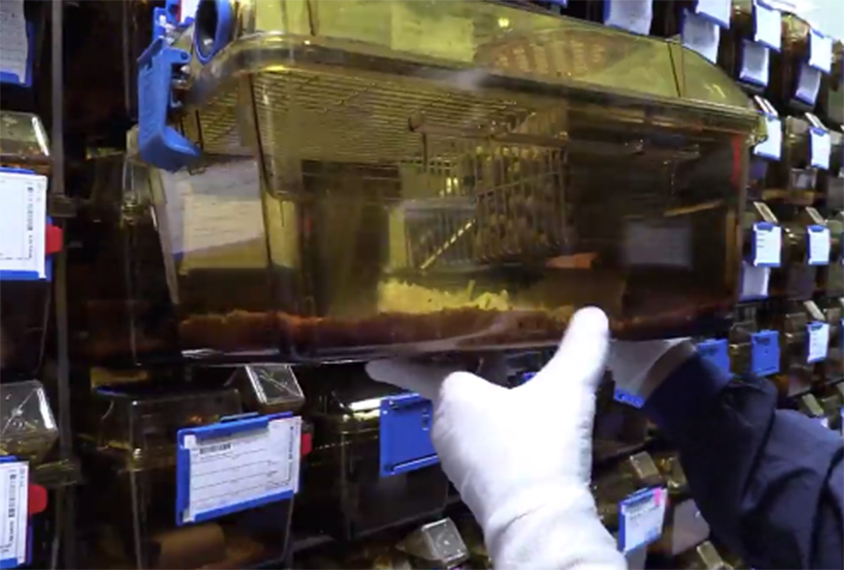 Marked mice: The end may be near for animal genetics research at the Harwell Institute in the United Kingdom.

News that two major animal research laboratories are likely to close down within a few years has left some researchers in the United Kingdom uncertain about the future of their work.

Officials at the Wellcome Sanger Institute, a leading genomics center based in Hinxton, England, announced on 16 May that they have made “the difficult decision” to close the institute’s animal facility. They said the move is driven by their scientific strategy but did not provide further details about the reason or timing.

Last week, staff at a second center, the Mammalian Genetics Unit at the Harwell Institute in Oxfordshire, England, learned that the U.K. Medical Research Council (MRC) — the unit’s parent organization — has recommended that the academic work there come to a close. Staff at the unit are awaiting the final decision; Harwell’s on-site animal facility, which supplies mice to institutions in the U.K. and beyond, is expected to remain open, however.

The closure of Sanger’s mouse facility, in particular, would be a blow to some researchers.

The 30 million pound ($38 million) facility was set up in 2006, employs some 70 people and hosts mice, zebrafish, rats and frogs. It provides genetically altered animals to thousands of researchers. It is famous for its role in the Human Genome Project and, more recently, a project that ‘knocked out’ every gene from the mouse genome.

“[The closure] comes as a bit of a shock,” says Albert Basson, professor of developmental neurobiology at King’s College London. “This institute has been leading the development and supply of innovative mouse models for research in the U.K. and internationally.”

Basson’s team uses several mouse strains developed and housed at the Wellcome Sanger Institute, and they had planned on using more, he says. Sanger has offered scant explanation or reassurance about the future of those models.

“Nobody on the outside really understands the reasons for this decision, how it was taken and what the impact will be,” Basson says.

Sanger officials say they will continue to fund research involving mice, but much less of it, and won’t need the dedicated facility at Hinxton. “We are working with other institutions to find a solution to accommodate our future mouse research requirements,” says Emily Mobley, the institute’s media manager.

Mobley did not respond to Spectrum’s questions about whether or where the animal models will be moved. “Further details about the closure are not currently available,” she says.

Sanger’s reluctance to divulge the reasons for the closure has led some researchers to speculate.

The move comes six months after Sanger scientists voiced “grave concerns” about animal welfare at the facility because of staff shortages, according to an article in Nature. In a November letter to Sanger’s chief operating officer, the scientists warned of an “imminent risk” of failing to meet government requirements and that the institute risked losing its license to do animal research.

A spokesperson from Sanger told Nature that the closure is not linked to welfare issues and had nothing further to add in response to Spectrum’s questions on the matter.

However, several scientists who spoke to Spectrum say the decision seems to be driven by a rushed move toward automated cellular studies, known as high-throughput cell biology — rather than animal experiments — to study genetics.

“I am told that Sanger are closing all animal model facilities, not just mice, which implies a major shift, presumably towards high-throughput cellular assays,” says Richard Mott, a geneticist at University College London.

Such a shift is “premature,” says Basson. “Nobody argues that [cell lines] aren’t helpful to answer some questions, but we simply cannot answer important questions about brain circuitry and behavior in a dish,” he says.

Not only that — there is increasing demand in the London area for mouse work, and most animal facilities are up to capacity, he says.

Those who set the animal research strategy at institutes such as Sanger must decide whether to continue supporting large centers like the one at Hinxton or to move toward a more distributed network of research locations, says Chris Magee, head of policy and media at Understanding Animal Research, a nonprofit organization that explains why animals are used in research.

“What we must hope is that the needs of scientific research are given due regard,” Magee says. “[There is an] ongoing need for animal models to provide insights where other methods cannot.”

It is not yet clear whether the strains developed at Hinxton will be available from alternate sources, such as the Jackson laboratory in the United States or commercial mouse suppliers.

The move comes at a tumultuous time for the U.K. mouse genetics infrastructure. The recommendation to close Harwell’s genetics unit is also “a reflection of the changing scientific landscape,” says Carmen Chai, senior press officer at the MRC. MRC officials have suggested the work done at the unit should move to “a more distributed network of academic research,” she says. The officials do not plan to make a final decision on the matter until the end of 2019, however.

The news of the dual closures comes as shock, says Richard Scrase, head of online communication at Understanding Animal Research, speaking in a personal capacity. “Once a large, complex unit is shut down, the accumulated wisdom that is held there is lost,” he says. “I haven’t seen a convincing argument in official statements or in the press to explain why the U.K. is closing down so much of its capacity to do mouse genetic research.”

Some other facilities are rumored to be evaluating whether to stay open, and a few more are opening or switching ownership — which may help to counterbalance the closures. Mott says: “The closure of one unit in itself is not significant, so long as the others can pick up the slack.”