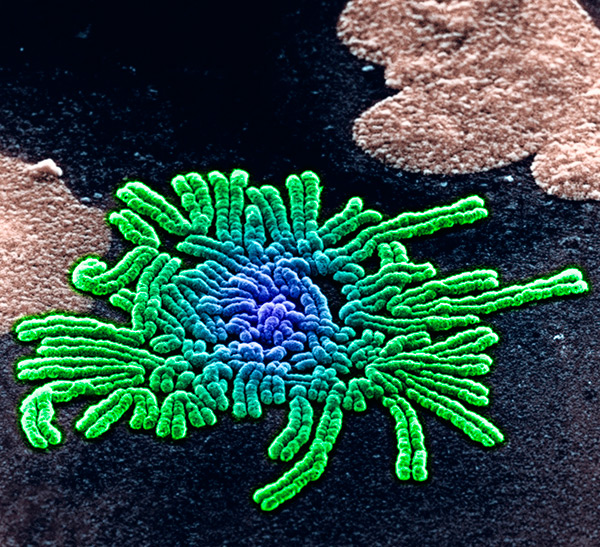 A. Sumner/Science Photo Library Meiotic mistakes: Billions of DNA nucleotides are copied during the production of eggs and sperm, creating an opportunity for genetic errors that lead to disorders such as autism.

A new method of statistical analysis can predict whether a rare mutation identified in someone with autism has a meaningful association with the disorder or was found only by chance, researchers reported in the September issue of Nature Genetics1.

Sequencing studies have discovered a plethora of mutations by comparing the genomes of people who have autism with those of their unaffected family members. Because many of these spontaneous, or de novo,mutations are rare, finding them in more than one person with the disorder is often enough to cement their position as autism candidates.

These de novo mutations are the result of a chance error when sperm or egg cells divide, however, and their presence in multiple people with autism might be the result of a coincidence. To rule out this possibility, researchers would need to sequence the genomes of hundreds of thousands of individuals without autism and confirm that none of them carry a mutation in this gene, says Benjamin Neale, assistant professor of analytic and translational genetics at Massachusetts General Hospital.

Neale and his colleagues have devised a much simpler alternative: They have built a model that predicts the statistical likelihood of a mutation occurring spontaneously in a gene. (Some DNA sequences are more likely to undergo mutation than others.) Based on this model, researchers can determine whether multiple mutations in a certain gene are expected, or signal a link to a disorder such as autism.

“The study shows the importance of using a model rather than comparing to actual data [from controls],” says Dan Arking, associate professor of genetics at Johns Hopkins University School of Medicine in Baltimore, who was not involved in the study. “With real data, unless you have much larger sample sizes, there is no power.”

To generate their prediction, the researchers calculated how often each DNA nucleotide in every nucleotide trio has evolved to a different nucleotide from chimps to humans. They used noncoding regions of the genome to calculate this baseline rate of mutation based on sequence alone.

For example, they calculated the number of times that the nucleotide trio AGA in chimps evolved to ATA, ACA or AAA in humans. From this, they pieced together the probability of mutation for each known gene in the human genome. The method also takes into account gene length, as longer genes are more susceptible to mutation.

Because only some nucleotide changes alter the corresponding amino acid, the researchers calculated separate rates for mutations that are harmful (loss-of-function), benign (synonymous) or alter the protein but with unknown consequence (missense).

Neale and his team applied this method to the sequences, derived in part from previously published studies, from 1,078 people with autism and 343 of their unaffected siblings.

Based on the predicted rate of mutation, 27 genes should be mutated more than once in the autism group. Instead, the studies identified 48 genes that show harmful mutations in two or more people with autism.

Among the unaffected siblings, six genes are mutated more than once: The predicted rate is three, but this difference is not statistically significant.

Three genes — DRK1A, SCN2A and CHD8 — are each mutated in three people with autism, a higher rate than expected. By contrast, although four people with autism have a potentially harmful mutation in the TTN gene, the gene is exceptionally large and so this high number of mutations is not considered unusual.

“If you wanted to understand the impact of a mutation, this is exactly how you would go about doing it,” says Michael Talkowski, assistant professor of neurology at Harvard Medical School, who was not involved in the study. “It takes some of the guesswork and interpretation out and relies instead on a data-driven strategy.”

The researchers also used their model to build a list of genes in which a mutation might be particularly harmful. They found 1,003 human genes that have significantly fewer harmful mutations than would be expected based on their sequence, but the expected number of synonymous mutations. This suggests that harmful mutations in these genes were selected against during evolution because of their potential to cause severe disorders.

People with autism, but not their unaffected siblings, are more likely to have a mutation in one of these genes than would occur by chance alone. Of the 86 genes that are least likely to be mutated, 27 are linked to a known genetic disorder.

“This is converging on the result that there are some genes that when mutated lead to significant developmental impairment very early,” says Talkowski.

As researchers sequence the genomes of more individuals with autism, the number of recurrent mutations in certain genes is likely to rise. This will make it even more necessary to be able to know which ones are relevant.

“There is going to be a whole raft of interesting things that are going to come together when we have 10,000 and even 100,000 samples assembled,” says Greg Cooper, faculty investigator at the HudsonAlpha Institute for Biotechnology in Huntsville, Alabama. Cooper has sequenced the genomes of about100 children with developmental delay and intellectual disability but hopes to expand to thousands of children over the next few years. “These tools will really start to shine when the datasets get much bigger.”