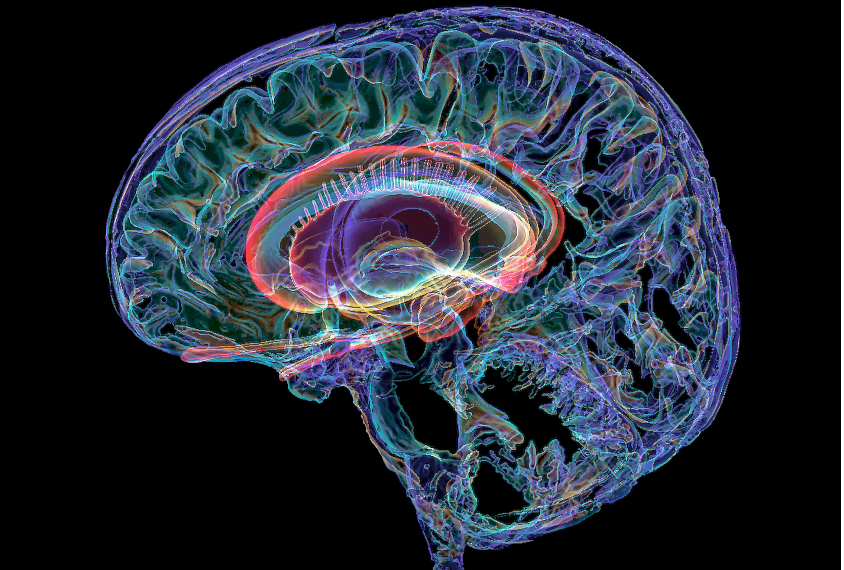 Brain inflation: Regions connected to the amygdala tend to be larger in autistic children than in their non-autistic peers.

Children with autism show atypical development of brain regions connected to the amygdala, an almond-size brain structure involved in processing fear and other emotions, a new study finds.

The brain regions most affected vary between autistic boys and girls, the study also shows, adding to the growing body of evidence for sex differences in autism, researchers say.

“Better understanding of amygdala development and its connectivity can aid in the development of novel biomarkers to study brain and social health,” says Emma Duerden, assistant professor of applied psychology at Western University in London, Canada, who was not involved in the study.

The amygdala is a central hub for brain circuits involved in social function. Previous studies have found it to be enlarged in some autistic children compared with non-autistic children, a difference that may be linked with anxiety and depression.

In the new study, researchers used structural magnetic resonance imaging to track the growth of 32 brain regions with direct connections to the amygdala. The study participants included 282 autistic children, 93 of whom are female, and 128 non-autistic children, 61 of whom are female. The researchers scanned each child up to four times — when the children were 39, 52, 64 and 137 months old, on average. They also measured the children’s autism traits and social difficulties using a questionnaire filled out by parents, called the Social Responsiveness Scale-2.

“While numerous prior studies have examined amygdala changes in individuals with autism spectrum disorder, this is the first study to examine changes in regions known to be directly connected to the amygdala,” says Joshua Corbin, professor of pediatrics at Children’s National Hospital in Washington, D.C., who did not participate in this research.

The increased volume of amygdala-connected brain regions was present in autistic boys and girls, but there were differences between the sexes. In autistic boys, the bilateral subgenual anterior cingulate cortex was the most enlarged brain area. This area plays a role in anxiety and detecting proper social behavior. By contrast, autistic girls showed the most significant enlargement in the left superior temporal gyrus. This region is linked with anxiety disorders and social perception and communication. The scientists detailed their findings online 27 June in the Journal of Neuroscience.

“I am most surprised by the extent of the differences in brain regions affected by autism in males and females,” says Deyou Zheng, professor of genetics, neurology and neuroscience at Albert Einstein College of Medicine in New York City, who was not involved in the study. The research adds “new and strong evidence to sex differences in the neurobiology of autism.”

The researchers also found that autistic children with traditional forms of anxiety, as defined in the Diagnostic and Statistical Manual of Mental Disorders (DSM), tended to have atypically large amygdalae. However, autistic children with a form of anxiety distinctly related to autism, as assessed by a clinical questionnaire known as the Anxiety Disorders Interview Schedule with Autism Addendum, displayed significantly slower right amygdala growth compared with other autistic and non-autistic children.

The anxiety-related findings, which the researchers reported in a separate study last year, might help explain inconsistencies seen across previous studies of amygdala size in autism, the scientists note. Future research should examine how both traditional and autism-specific forms of anxiety might shape the development of the brain regions that form a network with the amygdala, they add.

If the new study’s results hold up with replication, then examining amygdala-connected regions could help researchers gauge how well autism interventions are working, Corbin says.

Other potential therapeutic targets might also be gleaned from studying the cellular and genetic networks underlying the observed brain changes, Zheng adds.

One criticism of this work “could be that we treated the amygdala as a single unit, when in fact the amygdala comprises several distinct nuclei, each with distinct anatomical connections,” says lead investigator Joshua Lee, an assistant professional researcher at the University of California, Davis. “Contrasting these subnetworks would be an interesting approach going forward.”

Lee notes that his study examined the role of biological sex in autism. “However, the role of gender identity may be equally important,” he says. “Gender-nonconforming identity is notably common in autism, yet has garnered very little attention.”

In addition, “intellectual and language impairments are particularly debilitating yet understudied features within the autism spectrum,” Lee says. Analyzing amygdala-connected brain areas or other networks of brain regions as they did in this study may help understand these features, he says.

This article has been updated to clarify the source of the anxiety-related findings; they are from a study published last year.