Ambitious venture aims to create a mouse for every gene 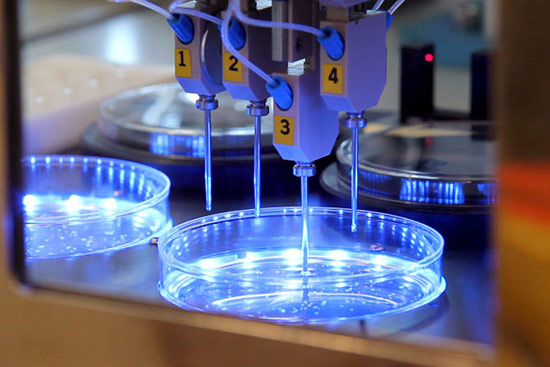 Genome Research Limited Assembly line: Researchers used automated technology to design thousands of constructs a week instead of the usual one or two.

A multi-site collaborative venture between the U.S., Canada and Europe has created nearly 17,000 mouse embryonic stem cell lines, each lacking one of the genes in the mouse genome.

The project, called the International Knockout Mouse Consortium, aims to create so-called ‘knockout’ mice for nearly all 20,000 or so genes in the mouse genome. The venture is funded by European, Canadian and U.S. funding arms, and supports both private and government labs.

A team at the Wellcome Trust Sanger Institute in Hinxton, U.K., published its technique for producing 9,000 of the embryonic cell lines on 16 June in Nature1.

The National Institutes of Health alone plans to produce and characterize 2,500 strains of mice from embryonic cell lines over the next five years, and another 6,000 in the following five years.

The cell lines, the constructs used to create them and the mice are all freely available to researchers worldwide.

Generating a single such mouse can take a research lab up to two years. By contrast, “this is a service to the world that will allow us to say, ‘I want to make a knockout mouse and all I need to do is fill out a form,'” says Jacqueline Crawley, chief of behavioral neuroscience at the National Institute of Mental Health (NIMH).

Mice that lack a particular gene allow researchers to investigate the gene’s function. For example, mouse models of autism help researchers study the role of certain autism-associated genes in behavior.

“You really need to know how each piece works in order to fully understand how the whole thing is functioning,” she says. “The knockout mouse strategy allows us to look at individual genes in pathways that we know to be important and to help us understand how those proteins work.”

Initially, researchers are likely to test the mice generated using standard assays, including some that are relevant to autism — for example, anxiety tests, or those that assess whether the mice become accustomed to a startling sound.

It might be possible to create a separate pipeline for autism-related tests that address social behavior, says Richard Paylor, professor of molecular and human genetics at Baylor College of Medicine in Houston, Texas.

Researchers might also be able to use the results of these tests to identify new genes that contribute to autism, he says.

Creating a cell line for almost every gene in the mouse genome is no easy task. “I just didn’t think it was going to happen five years ago. I was really doubtful,” says Colin Fletcher, program director at the National Human Genome Research Institute, which oversees KOMP, the American arm of the consortium.

But the researchers were able to speed up the process substantially1. They used computer programs to identify the sites of genes to be deleted, allowing them to design thousands of constructs per week, instead of the standard one or two.

They also made the constructs in 96-well plates, allowing them to automate parts of the experiment, instead of doing the steps laboriously by hand.

The most difficult step in creating a knockout stem cell line is accurately targeting a DNA construct to the correct place in the genome, so that it replaces the intended gene. Typical protocols have an average of 7 percent accuracy, but the new technique upped that number to 40 percent. “We were surprised we did so well,” says Bill Skarnes, senior investigator at the Wellcome Trust Sanger Institute and lead researcher on the Nature study.

The cell lines created by the Sanger team are also uniquely valuable because they are conditional knockouts, which means that the genes can be deleted at certain times in development and in specific tissues. This allows researchers to delete a gene later in life that would be fatal if missing in the embryo.

Researchers can also use the constructs to toggle gene expression on and off as they need, allowing them to test various hypotheses about the gene’s function. For example, they can examine the role of a gene in a particular brain region such as the striatum, which is associated with repetitive behaviors, or the hippocampus, needed for learning and memory.

So far, the team at Sanger has sent out 5,000 cell lines to laboratories not associated with the venture, from which researchers have produced about 1,000 strains of mice, says Skarnes.

A note of caution:

Still, some scientists are cautious about the usefulness of the resource for autism research.

For example, the cell line used for the project, C57BL/6N, is slightly different from C57BL/6J, the one traditionally studied in behavioral assays and used for autism mouse models, notes Crawley.

“[The cell lines are] a great technical accomplishment, but will not be revolutionary for autism,” Dolmetsch says.

However, the gene constructs used to make the cell lines are available to researchers, and could help create mice with more complex mutations, Fletcher notes.

Researchers can also use the mouse resource to parse out the role of individual genes in copy number variants. It’s like a “catalogue where researchers can pick out every gene in the region that they’re interested in,” says Skarnes.

To engineer a mouse lacking a certain gene, researchers first insert a construct into the genome of a stem cell line that replaces the targeted gene. They then inject early-stage mouse embryos with these stem cells.

“A lot of labs don’t have this technology. They’ve been stuck and had to collaborate with others,” says Skarnes.

To make these mouse models, the researchers are using a single background strain, C57BL/6N, the same one used for the mouse reference genome. This makes both phenotyping and mouse breeding efficient and consistent, he says. It also addresses the concern that mouse models made with different backgrounds can have variable behaviors, making it difficult to replicate results across laboratories.

Many laboratories keep mouse models “close to the vest” and duplicate one another’s efforts, adds Fletcher. The NIH launched the project because one large funding venture would be more cost-effective in the long term than funding a piecemeal cottage industry, he says.

A repository at the University of California, Davis is responsible for storing all the cell lines and mice produced by the American arm of the project and shipping them out to interested laboratories.

When Crawley toured this repository in March last year, she says she saw rows and rows of liquid nitrogen containers containing thousands of stem cells lining the walls.

“It was like a moment frozen in history,” she says. “The future of genetics and phenotyping in biomedical research was just sitting there in front of my eyes in these frozen vials.”