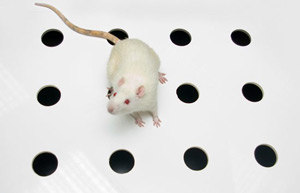 Repeat rescue: Memantine alleviates repetitive behavior — measured by how many times a mouse pokes its nose into holes in a board — in mice that model autism.

Memantine, a drug used to treat Alzheimer’s disease, can reverse autism-like features in mice lacking one copy of the MEF2C gene, according to a poster presented last week at the Salk Institute, Fondation IPSEN and Nature Symposium on Biological Complexity in La Jolla, California.

MEF2C is a transcription factor, a protein that binds to DNA to turn genes on and off.  It is involved in the creation and survival of nerve cells. Mutations that block the function of one copy of MEF2C, resulting in half the normal level of the protein, have been linked to autism, intellectual disability and epilepsy.

In the new study, researchers found that mice lacking one copy of MEF2C show repetitive behaviors, social abnormalities, increased anxiety and impaired learning and memory — all features associated with autism.

The mice also have abnormalities in the hippocampus, such as an imbalance of excitatory and inhibitory signaling, and a deficit in a type of neuronal signaling involved in learning and memory. These features have also been found in mouse models of autism.

Nobuki Nakanishi and his colleagues at the Sanford-Burnham Medical Research Institute in La Jolla treated the mutant mice with memantine or its derivative, nitro-memantine. Stuart Lipton, a collaborator on the study, discovered memantine’s potential for treating Alzheimer’s disease in the 1990s.

Memantine and nitro-memantine are known to block NMDA receptors, which are key modulators of learning and memory.

In the new study, the researchers found that the drugs reverse the anxiety, repetitive behavior and abnormal social behavior seen in the mutant mice. They also alleviate the deficits in learning and memory.

The researchers plan to test these drugs in neurons generated from induced pluripotent stem cells derived from two individuals who have MEF2C mutations and autism.