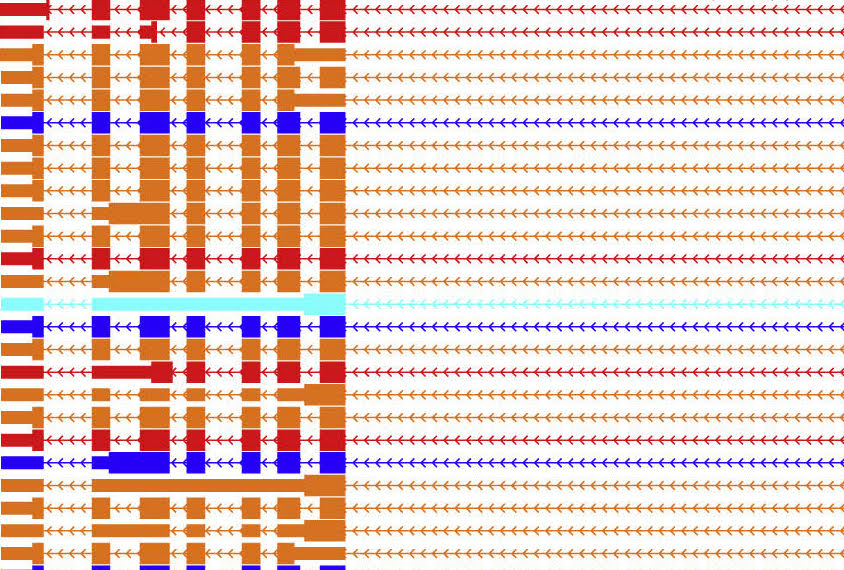 Playing alternates: More than half of the genes expressed in the human cortex, including some linked to autism, have more than one transcript isoform.

Researchers have uncovered thousands of new alternate RNA versions, or isoforms, of brain-expressed genes, including some involved in autism, according to a new study.

Several of the RNA isoforms are expressed at different levels during brain development, a separate analysis shows. Isoforms affected by autism-linked ‘loss-of-function’ mutations — which destroy a protein or disrupt its activity — tend to be expressed before birth and are typically involved in essential neuronal processes.

Together the findings confirm that alternative splicing — in which a gene’s RNA transcripts are cut and reassembled to make different proteins — is key to regulate gene expression in the brain. They also highlight the importance of studying a gene’s different isoforms to understand how specific variants contribute to conditions such as autism.

“Both studies are telling us that looking at the gene level means looking at a low resolution and missing lots of things,” says Sagiv Shifman, professor of genetics at the Hebrew University of Jerusalem in Israel, who was not involved in either study.

Isoforms of the same gene can have divergent properties and interact with different protein partners, previous research has shown.

“This tells us that what’s going on in the cell is determined by isoforms, not by genes,” says Lilia Iakoucheva, associate professor of psychiatry at the University of California, San Diego, who led the first study. “It’s a no-brainer that we should be looking at the isoform-level data rather than gene-level data.”

Thousands of isoforms are expressed at different levels during brain development, Iakoucheva and her team found through an analysis using the online database BrainSpan. Many autism-linked genes have isoforms whose expression levels change during early mid-fetal development, supporting the idea that this is a key period in autism.

Isoforms affected by autism-linked loss-of-function mutations are typically involved in essential neuronal processes and tend to be expressed before birth, the study also showed. And these isoforms frequently carry ‘microexons,’ small pieces of DNA within genes that are abnormally regulated in people with autism.

Isoforms with similar expression patterns in brain tissue tend to share similar functions, according to a statistical analysis. Networks of isoforms involved in splicing and in the function of neuronal connections were enriched in autism-linked loss-of-function mutations.

Four genes associated with autism and other neurodevelopmental conditions, including DYRK1A and SCN2A, carry loss-of-function mutations at splice sites — where enzymes cut the RNA molecule that is made into protein. Introducing the splice site mutations into these genes in cells grown in a dish usually resulted in isoforms with altered biological properties, but in some cases the mutations were harmless.

Software analyses typically classify mutations that affect splice sites as pathogenic, because they may result in truncated proteins, for example. Iakoucheva’s findings suggest that this is not always the case, however. The results appeared in Cell Reports in August.

“In some cases, these mutations don’t lead to the loss of the entire expression of the gene,” Shifman says. “If you want to understand the mechanism of diseases, this is very important.”

The BrainSpan data Iakoucheva’s study used was obtained with a sequencing technology that reads a few hundred base pairs at a time. Assembling long isoforms from such short reads can be challenging, and some isoforms may not be assembled correctly, she cautions.

Newer methods can sequence an entire transcript in one go, says Jonathan Mill, professor of epigenetics at the University of Exeter in the United Kingdom, who led the second study. “That means you can see the structure of that transcript and work out whether there are quirks in the sequence that could be interesting from a functional perspective,” he says.

Mill and his team used such ‘long-read’ sequencing approaches to characterize RNA isoforms in samples of fetal and adult human cortex — the brain’s outer layer. They identified transcripts mapping to nearly 13,000 genes expressed in this brain region.

More than half of the genes, including some involved in some forms of autism, have more than one transcript isoform, the team found. For example, TCF4, a gene associated with an autism-related syndrome, has 33 different isoforms expressed in the human cortex.

Nearly 40 percent of the transcripts detected, including some from autism-linked genes, had not been previously described. And nine autism genes, including FOXG1, were involved in ‘fusion’ events, in which two adjacent genes are transcribed into a single RNA molecule. Fusion transcripts are a common type of mutation in several kinds of cancer.

The study, which was published in November in Cell Reports, provides a reference map of RNA isoforms expressed in the brain cortex across development, Mill says.

Looking at isoforms is “the future,” says Manuel Irimia, a group leader at the Centre for Genomic Regulation in Barcelona, Spain, who wasn’t involved in either study. Even though long-read sequencing can offer insights into the sequence and structure of RNA transcripts, there’s room for improvement, Irimia says. Compared with short-read approaches, long-read sequencing yields fewer reads, so it may not capture all transcripts expressed in a cell.

“In five years, I’m sure analyses done with long-read sequencing will be much more accurate,” he says.

“We’re only at the beginning of how we use these technologies to characterize the full heterogeneity of expressed transcripts,” Mill says. Ultimately, he adds, identifying specific isoforms that are deregulated in conditions such as autism could have therapeutic applications, because technologies already exist to correct splicing defects by using short snippets of RNA.