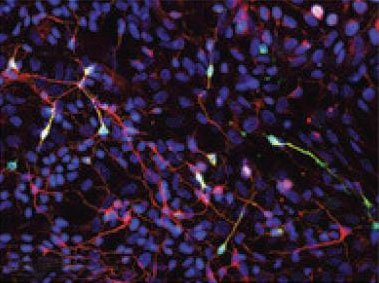 Disease in a dish: Neurons derived from people with Timothy syndrome make more of certain chemical messengers than controls do.

Disease in a dish: Neurons derived from people with Timothy syndrome make more of certain chemical messengers than controls do.

Earlier this year, the Seattle-based institute announced a massive influx of funds from its founder, Paul Allen, to support research into brain circuits.

Part of that effort will involve generating hundreds of lines of induced pluripotent stem (iPS) cells, adult cells that have been reprogrammed to their stem cell state and then differentiated into neurons and other cell types.

Ricardo Dolmetsch, who has joint appointments at the Allen Institute and Stanford University in California, will head the iPS cell effort. He leads a team that plans to adopt high-throughput tools developed for drug screening to generate and study these cells on a massive scale

“If they can develop a pipeline for producing iPS cells in a reproducible way, it would be very helpful,” says Flora Vaccarino, professor of child psychiatry and neurobiology at Yale University. “From our experience, it’s really hard to make iPS cells. It takes two to three months to make and characterize a line well enough to convince yourself it’s good quality.”

But she cautions that the iPS field is still relatively young, and there are many ways to make these cells. “There is not yet a unique, established procedure to make iPS cells,” she says.

Dolmetsch is best known for his work generating iPS cells from people with Timothy syndrome, a rare genetic disorder linked to autism. Studying neurons derived from the cells, his group uncovered molecular flaws — such as an excess of the chemical messenger catecholamine — that may underlie some symptoms of Timothy syndrome, and created a resource for screening drug candidates.

Expanding on that effort, the researchers have created 150 iPS cell lines from 50 people with autism, epilepsy, schizophrenia or intellectual disability. They are also making and analyzing cells from a control population to determine how much variability in gene expression, neural activity and other factors exists among the general population.

Part of the Allen Institute scheme is to create stem cell lines with mutations in a number of genes important in brain development and neurodevelopmental disorders.

To do this, the researchers plan to use talens, enzymes that bind to a particular piece of DNA and can introduce mutations in specific genes. The researchers also plan to create talens designed to deliver fluorescent markers.

The resulting cell lines will allow scientists to compare cells that are genetically identical except for the mutated gene. (One of the concerns with comparing iPS cells from people who have disorders with cells from controls is that the differences in genetic background may dwarf the effect of the disease-linked genes.)

The cells should be well characterized — for example, by sequencing their whole genomes — to make sure that the reprogramming process did not introduce any major genetic variations, adds Vaccarino. Talens can sometimes introduce mutations outside the targeted area, she says.

Dolmetsch says the talens and the cell lines will all be made freely available to the community. He and his team are also developing more reliable methods for differentiating iPS cells into specific types of neurons and for characterizing these cells. To do this, they have adapted high-throughput drug screens to analyze the expression of about 300 genes in individual cells.

“We get a barcode for every cell and see what cells produce particular marker genes,” says Dolmetsch. The researchers have developed fluorescent markers designed to mark specific cells, which they also plan to release to the community.

Dolmetsch’s team cross-referenced gene expression in neurons with the Allen Institute’s well-known gene expression maps. So far, they have found that the iPS-induced neurons express the same markers as neurons in different layers of the cortex, confirming that the cultured cells resemble normal neurons.

To characterize the cell lines even further, the researchers are planning a ‘phenotyping pipeline’ to detect abnormalities in the ways cells look or behave or in the genes and proteins they produce.

Among the techniques the researchers will use are calcium imaging, a measure of the cell’s electrical activity; RNAseq, which measures gene expression; and proteomics, the simultaneous analysis of many proteins. All of this information will be available to the research community as well.

“We hope it will help us to stratify idiopathic disease along a different axis than has happened in the past,” says Dolmetsch.

In a complementary effort, Ed Lein, associate investigator at the Allen Institute, is working to better define different types of brain cells based on their gene expression. For example, his team has found some genes restricted to the most recently evolved portion of the human brain, and some in a combination of layers of the cortex. “There is a diversity of patterns,” Lein said at the conference.

Lein’s collaborator, Amy Bernard, director of structured science at the institute, developed a method to fluorescently label specific cells according to their gene expression pattern. Looking at cells in which two such markers coincide, the researchers have successfully identified certain cell types, such as those that signal through the neurotransmitter gamma-aminobutyric acid. They plan to look for more complex combinations of markers that may identify more cell types.