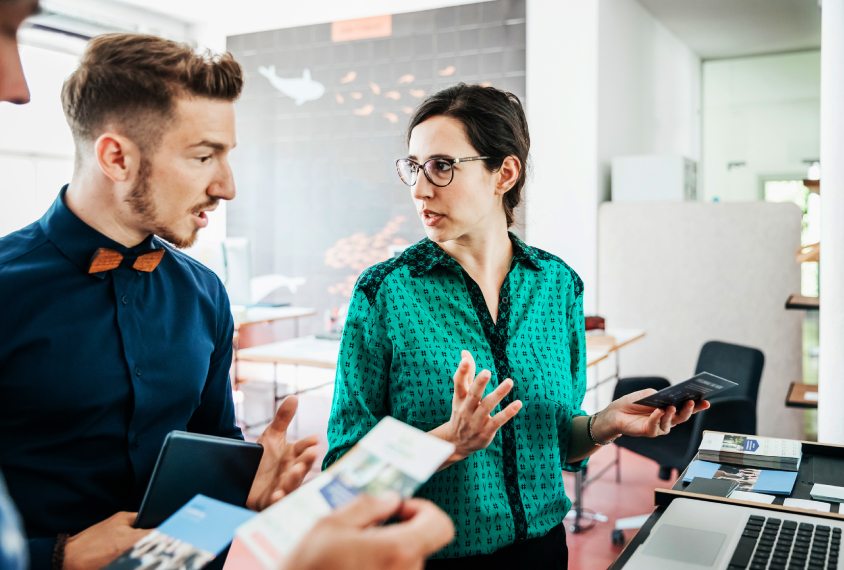 Eye to eye: Autistic and non-autistic people may not differ significantly in how they look to eyes for emotional information.

Eye-gaze patterns when people look at a face relate more to alexithymia, a condition marked by difficulties recognizing one’s own emotions, than to autism, according to a new study. The findings suggest that some emotion-processing differences considered core to autism are actually due to alexithymia, the researchers say.

Although autistic people are often presumed to have trouble recognizing and responding to facial expressions and emotions, the research has been inconsistent.

But increasing evidence suggests that these difficulties are actually due to a high rate of alexithymia among autistic people, says senior investigator Geoff Bird, professor of cognitive neuroscience at the University of Oxford in the United Kingdom. About 50 percent of autistic people have alexithymia, compared with 5 percent of non-autistic people.

“It’s the alexithymia and not the autism that’s driving these symptoms,” Bird says, “which is why you get such a mixture of results in the literature and such a variety of different competencies across autistic individuals.”

Researchers measure emotion processing by tracking how often a person focuses her gaze on another person’s eyes, usually in series of still images. In the new study, the team monitored how these gaze patterns changed in different circumstances and while participants watched videos, in an attempt to more closely approximate natural interactions.

“If I’m trying to make a coffee, then I potentially look at objects in the kitchen differently than if I’m trying to wash them,” says lead investigator Hélio Clemente Cuve, a graduate student at the University of Oxford. “The way people look at faces and expressions is highly dependent on what they are doing.”

The participants — 25 autistic and 45 non-autistic adults — watched short videos of people showing a neutral expression, which in most cases was followed by an expression of one of five emotions: happiness, sadness, anger, fear or disgust. In some cases, they attempted to recognize the emotion or judge its intensity, and they were sometimes told in advance which emotion they would see.

Each participant also filled out surveys measuring autism and alexithymia traits and symptoms of depression and anxiety.

Under all testing conditions, levels of alexithymia traits more accurately predicted how much time a participant spent looking at eyes, and how that behavior changed over time, than did levels of autism traits, the researchers found. And people with more alexithymia traits looked at eyes less often than people with fewer traits did, particularly while freely exploring the faces.

“If we don’t assess for alexithymia, it’s likely we might miss important aspects of social emotional behavior that we wouldn’t have otherwise,” Cuve says.

The findings were published in Cognition in April.

People with and without autism adjusted how much time they spent looking at eyes depending on what they’d been instructed to do. When cued to expect a certain emotion, for example, their gaze patterns were more structured and predictable than when they were evaluating the emotion — suggesting they were seeking less information from the eyes.

But higher levels of alexithymia lessened the extent to which a person modulated her gaze in response to instructions. And in people with alexithymia, gaze patterns became more unpredictable, not less, in the cued condition.

The results contradict the theory that autism is driven in part by an inability to incorporate prior knowledge into decision-making, Bird says, because autistic people’s gaze patterns became more predictable when they knew the emotion they were about to see.

“I’m not sure I would say yet that alexithymia is responsible for this lack of top-down integration or failing to use this prior information — that’d probably be too far,” Bird says. “But certainly the results are not really compatible with this idea that people with autism don’t use prior information in their judgment or their behavior.”

The findings are “very exciting, very impressive,” says Uttama Lahiri, associate professor of electrical engineering at the Indian Institute of Technology Gandhinagar in Gujarat, India. The analysis of eye-gaze patterns in response to dynamic emotions, rather than static images, is particularly useful, says Lahiri, who is studying eye gaze to develop virtual reality platforms for autistic children.

The paper provides strong evidence for Bird’s hypothesis that eye-gaze patterns are more driven by alexithymia than by autism, says Jennifer Cook, a senior fellow at the University of Birmingham in the U.K. And it underscores the need for researchers studying emotion recognition to measure alexithymia traits.

For example, Cook found that autistic and non-autistic adults differ in their recognition of anger but not of happiness or sadness after controlling for alexithymia, suggesting that autism affects processing of some emotions but not others.

The methods used in the paper — particularly the measure of predictability over time — also provide a road map for other researchers, Cook says.

“I can imagine quite a lot of use for this in the future,” she says.