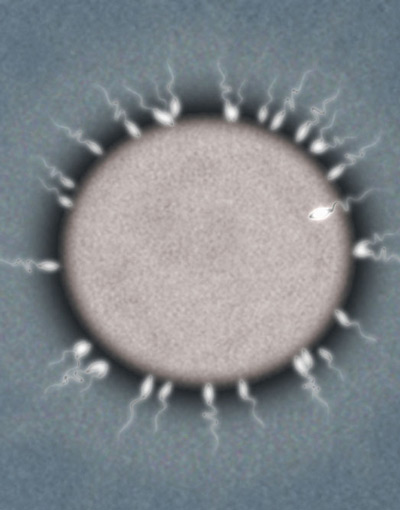 DNA delivery: Sperm from older males tend to have abnormal methylation, but it is unclear whether these patterns survive after sperm fertilize eggs.

The configuration of methyl tags that modify DNA in sperm change as men get older,according to a study published 10 July in PLOS Genetics1. These alterations may help explain why children of older fathers are at increased risk for neuropsychiatric disorders such as autism.

Researchers at the University of Utah collected sperm from 17 men, once in the 1990s and again in 2008.They found that the distribution of methyl tags, a particular kind of DNA modification, shows relatively consistent changes over time in the sperm.

“This paper is strong evidence that indeed with aging, DNA methylation patterns are changing in pretty dramatic ways,”says Jay Gingrich, Sackler Institute Professor of Clinical Developmental Psychobiology at Columbia University, who was not involved in the study.

However, the study does not prove that these altered patterns survive past fertilization or influence the risk of disorders such as autism.

“Our results don’t make a direct connection between methylation change and outcomes in the offspring,”says Bradley Cairns, professor of oncological sciences and biochemistry at the University of Utah and a Howard Hughes Medical Institute investigator.

Changes to DNA methylation and mutations can both theoretically contribute to autism risk.

Methylation can affect gene expression and brain development. And children with autism have been shown to have atypical patterns of DNA methylation near some autism-related genes. Studies have also shown that mutations in sperm DNA accumulate as fathers age and that older fathers are more likely than younger ones to pass on mutations to their children.

But no one has directly shown that accumulation of mutations in older fathers increases autism risk in their children, notes Daniel Weinberger,professor of psychiatry, neurology and neuroscience at Johns Hopkins University in Baltimore, who was not involved in the research.

The researchers collected sperm samples in the 1990sfrom men ranging in age from 23 to 56 years,with an average age of 38.By the time they collected samples again in 2008, the men were 50 years old on average.

They then compared methylation across the young and old sperm genomes. They found that most of the men’s sperm lost methylation at 110 genes and gained methyl tags at 7 genes, either on the gene itself or in regions regulating gene expression.

The researchers validated their findings by recruiting 47 men under the age of 25 and 19 men over the age of 45 and collecting their sperm just once. They assessed methylation in these samples in a subset of the regions they had previously identified and found that sperm methylation patterns are closely tied to the men’s age.

Some of the genes that lose methylation as men age are associated with bipolar disorder and schizophrenia, both of which have been linked to having an older father2, 3. The study did not identify any autism-associated genes with methylation changes.

Gingrich says this is not surprising, as the study relied on only a few men. “The absence of any strong autism candidates does not necessarily mean that this is irrelevant to autism,” he says. “I think there’s a certain amount of randomness to the genes that are going to be affected.”

It’s also possible that some of the affected genes will yet turn out to be linked to autism.“There is an enrichment for genes with neural function in the gene set that we get,” says Cairns, “and autism is not a completely understood disease in terms of all the contributing alleles.”

Even if researchers eventually do find changes in autism genes, their significance is likely to remain unclear.

First, sperm with altered methylation may not be as fit as unaltered sperm, and may not have the same chance of fertilizing an egg, points out John Greally, professor of genetics, pediatrics and medicine atAlbert Einstein College of Medicine in New York City.(Greally did not contribute to the study but edited it for PLOS Genetics.)

When fertilization does occur, it’s unclear whether the sperm’s methylation patterns get passed on to the child. “After fertilization, the paternal genome very quickly gets wiped clean of most of its DNA methylation information, with the exception of a subset of loci that appear to be quite stable,” says Greally.

Cairns and his collaborators are figuring out which sections of human sperm DNA tend to have methylation that survives in the embryo, and whether the changes are important.

In the end, it’s possible that the association between paternal age and autism is related neither to methylation changes nor to mutations in aging sperm. Some studies have shown that firstborn children are more likely to have autism than their later-born siblings. And men who become fathers late in life may have shared genetic characteristics, perhaps related to their temperament, that increase autism risk in their children.

“There’s no question that these changes are happening and they go the direction of the age association with risk,” Weinberger says. “But they also could be totally independent observations that are not mechanistically linked.”