After 60 years, scientists are still trying to crack a mysterious serotonin-autism link

In 1961, the late psychiatrist Daniel Freedman made what would become one of the most replicated — and most mysterious — discoveries in the history of autism research. Comparing blood levels of the neurotransmitter serotonin in 4 non-autistic and 23 autistic children, he found significantly higher levels among the latter group. Since then, researchers have repeatedly identified this trait, called hyperserotonemia, in about a third of autistic people tested.

It’s not difficult to theorize how hyperserotonemia might be linked to a range of autism traits. Neurons that release serotonin extend into practically every part of the brain, where they modulate signals sent among other neurons. Selective serotonin reuptake inhibitors (SSRIs), drugs that raise levels of serotonin in the brain’s synapses, treat psychiatric conditions, such as anxiety and obsessive-compulsive disorder, that can co-occur with autism. And serotonin prompts the gut to contract and facilitate digestion, which is often impaired in autistic people.

So when Edwin Cook, professor of psychiatry at the University of Illinois at Chicago, began to study the biology of autism in the 1980s, hyperserotonemia seemed like an obvious place to start. “We didn’t have much [else],” he says. “There were plenty of mothers of older patients I saw who had been labeled refrigerator mothers,” a term that refers to the discredited idea that unaffectionate mothers cause autism. The serotonin finding offered a tangible, biological clue.

Even today, with decades more autism research to look back on, the hyperserotonemia result stands out. “It’s one of the few robust biological clues that we’ve had in autism,” says Jeremy Veenstra-VanderWeele, professor of psychiatry at Columbia University and a former advisee of Cook’s.

But so far, it has escaped explanation. Nor have researchers been able to definitively link hyperserotonemia to specific genetic, anatomical or behavioral traits in autistic people. This apparent lack of progress has led some to disregard work on the neurotransmitter, according to serotonin researcher Georgianna Gould, associate professor of physiology at the University of Texas Health Science Center at San Antonio. “I’ve actually seen reviews come back that say that serotonin has nothing to do with autism,” she says.

With decades of effort producing no clear answers, serotonin researchers are themselves disappointed, they say. But their small community is exploring new approaches to decode one of the autism research field’s most enduring observations. And an influx of new biomarker data could help them on their quest. 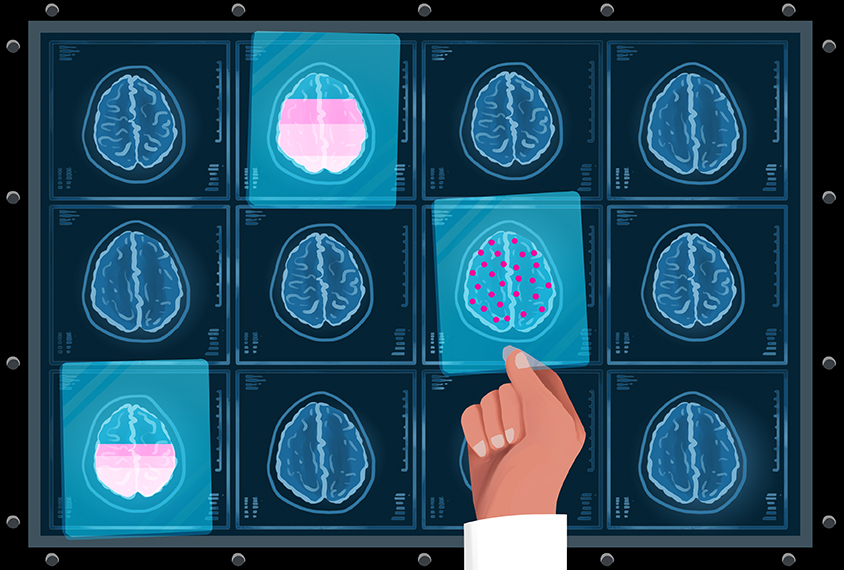 In the decades since Freedman’s discovery, clues about hyperserotonemia have only come in a slow trickle, in part because it’s so hard to discern what blood serotonin levels tell us about the brain. Modern imaging tools such as functional magnetic resonance imaging have enabled researchers to examine signatures of human brain activity in real time. So more indirect approaches, such as measuring serotonin blood levels, have fallen out of favor, Veenstra-VanderWeele says.

The two systems have at least one thing in common, though: The serotonin transporter. This protein pumps serotonin back into neurons after its release and also pumps blood serotonin into platelets, the cells that carry almost all of the serotonin in the circulatory system.

The serotonin Freedman measured to obtain his 1961 result was primarily held in platelets, which raised an interesting possibility for Anderson: Autistic people with hyperserotonemia might not produce more serotonin. Instead, perhaps their platelets take up more or secrete less serotonin than usual, thanks to serotonin transporter differences. Anderson carefully measured blood serotonin levels outside of the platelets in hyperserotonemic autistic people and found no difference from controls, which suggests that the transporter might indeed be responsible.

Based on these results, Veenstra-VanderWeele worked with Randy Blakely, executive director of the Florida Atlantic University Brain Institute, who led the 2005 study, to develop a mouse line that carried one of those SLC6A4 mutations.  Although the people with the SLC6A4 variants were not hyperserotonemic, the mice carrying the SLC6A4 mutation turned out to be. The animals also showed some autism-like behaviors. “We certainly didn’t set out to make a hyperserotonemia mouse,” Blakely says.

The mice bolster the transporter theory, but it also has some major strikes against it: Large-scale genome-wide association studies have failed to find a link between SLC6A4 and autism, and ClinGen, a database that compiles evidence about ties between genes and heritable conditions, records SLC6A4’s role in autism as disputed.

If the transporter does play a role in autism, there’s more to the story than a single gene mutation. Additional layers of complexity may come from how SLC6A4 interacts with other gene variants or how it affects the prenatal environment.

While studying the serotonin transporter mice, Veenstra-VanderWeele and his colleagues noticed something curious: Pups whose mothers had the mutation exhibited abnormal brain development, regardless of their own genotype. And he later observed a similar trend in people: Autistic children with prominent traits tend to have mothers with low serotonin levels.

It’s not an entirely new association. Scientists have long investigated whether a woman’s use of SSRIs during pregnancy increases the chances her child will have autism. Some studies suggest they do, but the implications remain unclear. “Most of us think that it’s really identifying an association that we’ve known about for a long time, which is that family risk of mental illness also is associated with increased family risk of autism,” Veenstra-VanderWeele says.

Mutations in SLC6A4 might also interact with other gene variants to contribute to autism. When Veenstra-VanderWeele and Blakely bred a second strain of mice carrying the same SLC6A4 mutation against mice with a different genetic background, the animals exhibited normal serotonin levels and no autism-like traits.

In people, the contributions of the genetic background are likely even more pronounced, Gould says, because mice “are a lot more homogeneous than the human population is.” Add to that the heterogeneity of autism itself: A variety of genetic links have been found in different autism subpopulations.

This heterogeneity only makes the original hyperserotonemia result more impressive, Anderson says. “To see a group difference in a heterogeneous category is surprising.”

But hyperserotonemia itself is heterogeneous — about two-thirds of autistic individuals have serotonin levels no different from those seen in non-autistic people. Unfortunately, Veenstra-VanderWeele says, it’s impossible to cut through this heterogeneity with existing data from large-scale genome-wide association studies, because none of those studies have recorded the serotonin levels of their participants.

“I wish that we knew which genetic subtypes, which genetic disorders that contribute to autism risk, are associated with elevated blood serotonin levels. I’d love to know that,” Veenstra-Vanderweele says. “But people stopped measuring the biomarkers, so we don’t know.”

And by not measuring blood biomarkers, he says, scientists are giving up on a simple way of studying neurotransmitter systems. “We have a difficult time looking at neurochemical systems in awake living humans, in the same way that we could in an animal.”

In the future, information on hyperserotonemia might not be so hard to come by. An ongoing multisite project in Europe, the EU-AIMS LEAP study, plans to genotype 437 autistic participants and collect a host of data about each of them, including their blood serotonin levels.

The project has already produced some interesting findings. Autistic people have less serotonin transporter in their brains than non-autistic people do, according to one study that used positron emission tomography to directly measure the protein’s levels. That difference might arise because serotonin-releasing neurons make fewer synapses, or because each synapse contains fewer transporter molecules, says lead investigator Johan Lundberg, associate professor of psychiatry at the Karolinska Institutet in Stockholm, Sweden.

If the LEAP project offers more insight into the underpinnings of hyperserotonemia in autism, it could help clinicians treat traits that autistic people find distressing, Cook says. He notes that there are a variety of drugs on the market that modulate the serotonin system, including SSRIs.

To date, there are no studies that look at whether individuals with hyperserotonemia show differences in response to SSRIs, Veenstra-VanderWeele says. But though data on the efficacy of SSRIs to ease autism behaviors is mixed, the single most promising study shows that SSRIs can alleviate compulsive behaviors, which may be particularly disruptive.

Other conditions associated with autism, such as anxiety and gastrointestinal distress, may be linked to serotonin. But clinicians aren’t likely to leverage serotonin to treat those problems any time soon, says Kara Gross Margolis, professor of pediatrics at Columbia University.

After decades in the field, Cook describes himself as frustrated. “I wish we had a more definitive understanding of what hyperserotonemia is trying to tell us,” he says. But he knows it’s nothing straightforward.

A previous version of this article erroneously referred to common variants in the SLC6A4 gene as mutations.