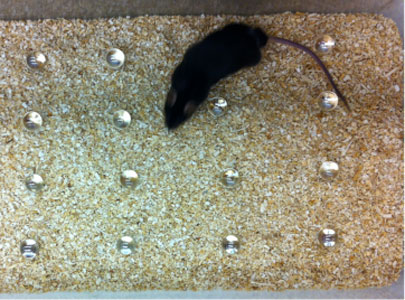 A drug that mimics the neurotransmitter acetylcholine relieves repetitive behaviors in a mouse model of autism, according to a poster presented Monday at the Society for Neuroscience annual meeting in New Orleans.

The results suggest a need for more attention to the role of acetylcholine signaling in autism. “This network is not really looked at much” in studies of the disorder, says Dionisio Amodeo, a graduate student in the laboratory of Michael Ragozzino at the University of Illinois at Chicago, who presented the work.

There are hints that acetylcholine may be involved in autism. For example, a small study found that donepezil, a drug that inhibits the breakdown of acetylcholine, improves some symptoms in children with the disorder1.

In the new study, researchers injected BTBR mice with oxotremorine, a drug commonly used in animal studies that activates a class of acetylcholine receptors, called muscarinic receptors, in neurons.

BTBR mice are a commonly studied mouse model of autism. They groom themselves excessively and obsessively bury marbles in the woodchip bedding material on the floor of their cage. This is reminiscent of repetitive behaviors seen in people with autism.

Oxotremorine alleviates both repetitive grooming and marble burying in the mice, the researchers found.

They also measured how active the mice are overall, and found no difference between treated and untreated animals. “We wanted to make sure the drug wasn’t just making them lethargic,” Amodeo says.

The results suggest that oxotremorine or another drug that activates muscarinic receptors could help reduce repetitive behaviors in children with autism.

Oxotremorine isn’t approved for use in people, and causes tremors in mice at high doses. The mice in this study received a low dose, just 0.01 milligrams per kilogram of body weight.

Amodeo and his colleagues plan to investigate how drugs that activate subtypes of muscarinic receptors affect repetitive behaviors in the mice. These drugs may have fewer side effects and make better candidates for clinical trials.

The researchers also plan to study oxotremorine’s effect on other autism-like symptoms in BTBR mice, such as rigid behaviors.