Access to gene sequences may be a spit sample away 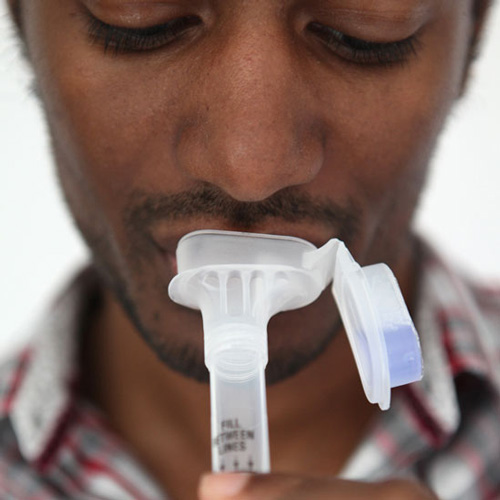 Courtesy of Anthony Nolan Trust Spit take: The kits used by some companies for spot checks of the genome may generate high-enough quality DNA for sequencing all genes.

DNA extracted from saliva is just as useful for sequencing genes as is DNA from blood cells, according to a report published in April in BMC Genomics1. The easy and inexpensive method would be a boon for studies that need to sequence large numbers of people.

“There is considerable hope for really getting at the bottom of autism genetics through sequencing of large families,” says Jay Shendure, associate professor of genome sciences at the University of Washington in Seattle, who was not involved in the study. “It does become a lot more manageable when you think that you can mail kits to families.”

The new study used the same kit as 23andMe, a California-based company that scans an individual’s DNA for as little as $100. Typically, these personal genomics companies look at a small portion of the genome for common changes to single DNA nucleotides with known links to certain diseases or ancestry.

Autism researchers often look instead at the full sequence of exomes, the protein-coding regions of the genome. This reveals rare mutations, which are thought to be involved in many cases of autism.

There are a handful of published studies that have used DNA extracted from saliva to sequence exomes. But most researchers have remained skeptical of the method’s reliability.

“One reviewer wrote back and said, ‘Oh, you can’t possibly do exome sequencing from saliva,’” says Brenna Henn, lead investigator on the new study and assistant professor of ecology and evolution at Stony Brook University in New York. “And so I decided to show that you could, and go into all of the nitty-gritty details.”

Henn and her colleagues are sequencing the exomes of members of the KhoeSan, a South African hunter-gatherer tribe, in order to study population diversity. The new study looked in detail at 15 of these exomes and at two whole genomes.

Tribe members are reluctant to give blood and the samples can be difficult to preserve in hot, rural environments, says Henn. Collecting saliva also prevents her students from drawing blood from people with a high risk of human papillomavirus infection.

Even when DNA in saliva deteriorates, the study found, the pieces are still large enough to keep most genes intact. The overall quality is lower than that of blood samples, says Henn, but is good enough to allow full sequencing of the exome.

Another limitation of the method is that it may restrict researchers to exomes. Of the two full genomes obtained from the spit samples, only one was of good-enough quality to analyze.

Autism is known to involve large duplications or deletions in chromosomes, and to find those, it’s necessary to analyze large stretches of the genome, if not the whole genome.

“That’s where all of these methods sort of fall short,” says Michael Talkowski, assistant professor of neurology at Harvard Medical School. Still, he says, using saliva to sequence exomes is a useful step. “If the DNA being lower quality isn’t hurting you in terms of the quality of the exome, then that’s a very significant move forward.”

Saliva samples are often contaminated with the bacteria in the mouth: About 2 percent of the final DNA in Henn’s analysis is bacterial.

Henn turned this to her advantage: She sequenced the bacteria and found that the KhoeSan carry different bacteria than Americans do. Researchers could similarly study the bacterial populations that live in the bodies of children with autism.

To minimize the bacterial contamination, researchers should provide clear instructions on how to spit, says Pui-Yan Kwok, professor of dermatology at the University of California, San Francisco. Kwok has analyzed the exomes of nearly 1,000 saliva and blood samples for a study on bipolar disorder, and has found that the two are comparable. The results are in press in Genome Research.

A good saliva sample originates from the salivary glands, whereas a poor one contains the saliva that pools in one’s mouth. Some people don’t — or, as in the case of children, are unable to — follow the directions, such as brushing their teeth before they spit. “Not everyone spits in the same way,” Kwok says. “Sometimes we get saliva with coffee [mixed in].”