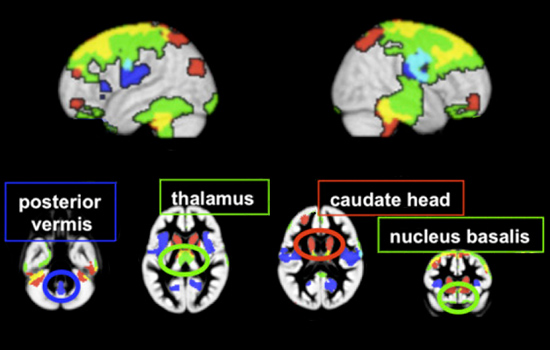 Altered trajectories:&nbsp;Some brain regions (in green) grow larger over a two-year period in children with fragile X syndrome than in healthy controls.&nbsp;

Brains of children with fragile X syndrome go through an abnormal trajectory of development in the first few years of life, according to the first study to track how the disease unfolds in the brain. The findings were published in May in the Proceedings of the National Academy of Sciences1.

Fragile X syndrome — a genetic disease that causes mental retardation and often autism — results from the complete loss of fragile X mental retardation protein, or FMRP, which is important for many brain processes. By comparing children with the syndrome and healthy controls, the new findings present a picture of when and where FMRP is expressed during early development.

“This is beautiful work,” says April Benasich, director of the Infancy Studies Laboratory at Rutgers University, who was not involved in the study. “The ability to link individual differences in the structure of the brain to some genetic precursor is extremely powerful.”

Previous imaging studies of adults and young children with fragile X syndrome have consistently shown that they have an enlarged caudate, which is important for learning and memory, compared with healthy controls and with children who have general developmental delay2. Those with the syndrome also tend to have an abnormally small cerebellar vermis, which helps maintain balance and in sensing one’s own movement3.

These differences among various brain structures make some sense, given the multitude of studies showing that FMRP helps prune synapses, the connections between neurons. Different regions undergo pruning at different points in development, and the process is crucial for learning. Research in mice has found that FMRP seems to be particularly important for pruning during specific developmental windows4.

“People tend to look at development of the brain as a progressive event — as just getting bigger and bigger as we get older,” notes Richard Nowakowski, chair of biomedical sciences at Florida State University, who was not involved in the new study. But actually, the process is much more like writing a book, he says. “You write something and then you go in and edit it, changing individual words, grammar, even whole paragraphs. In the brain, there are both progressive and regressive events in order to achieve the final product.”

Nowakowski’s lab investigates regional brain development in normal mice. The new study is “tremendously valuable,” he says, because it is one of the first to show how the brain changes over time in a young child with a genetic disease. The work opens the door to further studies using mouse models, he adds.

Beginning in 2000, Allan Reiss and Joe Piven collaborated to recruit 41 children with the syndrome, 7 with general developmental delay and 28 typically developing controls.

The researchers completed a structural magnetic resonance imaging scan — which measures the volume of specific brain regions — in each participant at two time points: once between the ages of 1 and 3, and again two years later.

At the earlier time point, some brain areas — such as the caudate and vermis — already differ significantly among the groups, suggesting that they stem from glitches during early or even prenatal development.

When comparing other regions, however, brains of the fragile X group look normal at the first time point, but grow much faster than those in the control groups during the two-year period between scans.

The abnormal growth spurts crop up in large segments of the thalamus, the ‘relay station’ in the middle of the brain that integrates information from several different sensory systems. This finding is intriguing because children with fragile X often have hypersensitivity to light, sound and touch, Reiss says.

The team also found increased growth of the basal forebrain, which releases the chemical acetylcholine across the brain in order to dial down excitatory signaling.

“This was really interesting for us because there are lots of arrows pointing to the cholinergic system as one that may be particularly affected in fragile X,” says Reiss, professor of psychiatry and behavioral science at Stanford University. His group is testing donepezil, a drug that slows the breakdown of acetylcholine, in a double-blind and placebo-controlled clinical trial of adults and children with fragile X.

The new study may be important for understanding how donezepil affects the brain. For instance, treating with donepezil after age 5 may not help if the window in which FMRP affects that system has already closed.

The study’s longitudinal approach is more useful than simply comparing genetic make-up and behavior, Benasich adds, though it will be important to verify these findings in larger numbers of children with fragile X and healthy controls, and to investigate children younger than 1 year.

In the past five years, her group has scanned the brains of 68 healthy children at several time points between 3 and 24 months of age, and has found a surprising amount of normal variability. “It’s very tricky to do, but we really need to know more about what the normal trajectory looks like, and what the range of normative is,” she says.

It’s also unclear how these results might translate to the wider spectrum of children with autism, who carry many different kinds of genetic variations. Although the disorder has symptomatic overlap with fragile X, some studies have found that the brain patterns of individuals with each condition are significantly different.