A simple behavioral test for mice 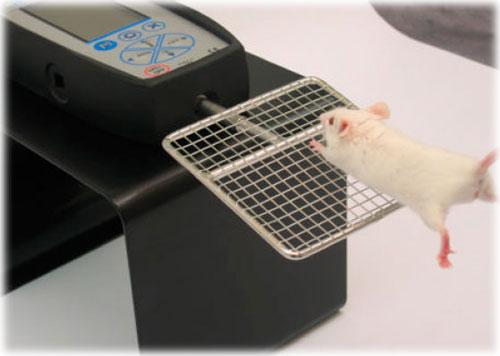 Not-so-simple setup: Unlike the new ‘licking test’, most behavioral tests for mice require them to perform unnatural actions.

Researchers at the Society for Neuroscience today described a new test for animal behavior that doesn’t interfere with normal mouse behavior, doesn’t require human interaction, and makes it simple to take long-term measurements: the ‘licking test’.

Best of all, the new test seems to differentiate between two models of Angelman syndrome that are indistinguishable by other behavioral tests.

As the number of mouse models for autism grows, so does the number of tests scientists use to quantify their abnormal social, learning and motor deficits. For instance, ‘Rotarods’ or rotating metal rods, test a mouse’s balance, and metal tension grids measure grip strength.

But all of these tests have one major drawback: they require the mice to perform unnatural behaviors and, often, interact with humans.

The licking test, in contrast, is extremely simple: mice move freely in a cage that has a metal floor. When they visit their water spout to have a drink, the contact induces a tiny electric current that sensors pick up.

“It’s relatively easy,” said Detlef Heck, an associate professor at the University of Tennessee. “We usually run the tests over the weekend, come in Monday and there you go.” Heck published the test in July.

The maternal copy of the UBE3A gene accounts for most cases of the syndrome, producing two forms of the disorder: one in which the allele is mutated and the other in which it is deleted. Scientists have created mouse models of both types.

But interesting and significant differences crop up when the two models’ water-licking behavior is measured. For example, mice with the deleted gene have infrequent drinking patterns, but spend more time at the water source. The rhythm of licking and number of licks per visit to the water source are also significantly different between mice with the mutated gene compared with control mice and those that have the deleted gene.

What’s more, water consumption in the mice depends on the amount of UBE3A expression in the cerebellum, the brain region responsible for motor coordination, Heck found.

Heck has begun using the test mouse models of fragile X syndrome and says there is also potential for developing similar tests on mouse models of autism. “I think there’s a lot to be gained if we develop similar [non-invasive] tests of other aspects of mouse behavior, especially social behaviors,” he said.