A mouse model for autism 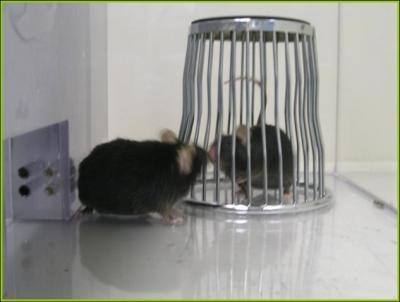 Have we met before? Mice lacking the NF1 gene spend as much time sniffing a new mouse as they do a familiar mouse, and could serve as a good model for autism.

A mouse model of neurofibromatosis ― a genetic neurodevelopmental disorder that leads to nerve tumors, memory problems and, often, autism ― exhibits deficits in social interaction and social learning, according to research presented in a poster session today at the Society for Neuroscience conference.

These results mean that the neurofibromatosis mouse should be added to the growing list of mouse models representing subsets of people with autism, the researchers say.

Only 1 in 4,000 people in the general population have neurofibromatosis, but its prevalence in the autism population has been estimated to be as high as 14 percent.

Scientists first created the mouse model of neurofibromatosis, in which one copy of the NF1 gene is deleted, in 1994. But no one knew whether the social deficits associated with the condition were caused by the genetic mutation or by other factors.

“We’re the first ones to show the deficits in social learning associated with this model,” says John Spence, a graduate student in Anantha Shekhar’s lab at the University of Indiana.

The team put the NF1-knockout mice through several behavioral tests and observed the most dramatic differences with control mice in a test of ‘social learning.ʼ For this test, the researchers timed how long the mice spent sniffing mice that they had encountered 24 hours earlier.

Normal mice spend much more time with new mice than with mice they had already met before. In contrast, the NF1-knockout mice show no preference for the new mouse over the familiar mouse.

“We think this difference in long-term social learning could potentially be an important behavioral marker in mice for autism,” says Spence.

He says the results also suggest that the biochemical pathways affected by the NF1 protein ― including the RAS pathway and the PI3-kinase pathway ― may be good targets for autism drug treatments.